7 causes that generate cracks when the knife is turned...

If when you turn off the knife you pulled out of the oven and dip it in oil and feel a crack, this is not good! 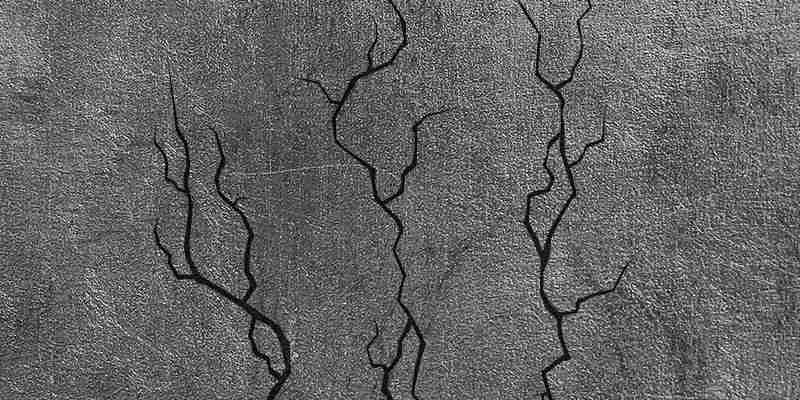 This phenomenon is rarer if you use extruded steel mill bars but much more frequent for those who forge their own bar that will be transformed into a knife even if unfortunately I happened to find a bar that had an internal crettature problem and so in doubt I used the bar for some experiment because I did not trust to use it to make a finished knife and risk finding myself a non-compliant object or that created problems in the field during its use.

There are many reasons why cracks can occur during treatment, but knife steels as well as tools are at greater risk due to their high toughness. 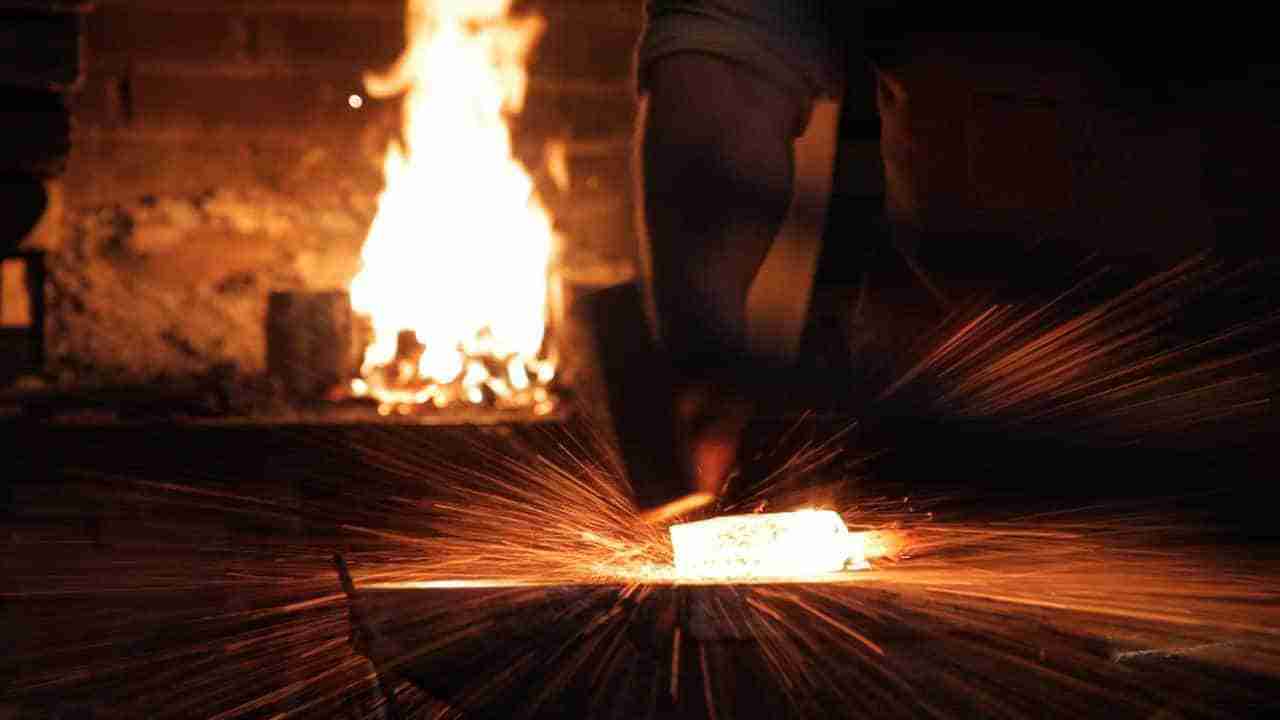 If you have a doubt about the quality and integrity of a steel bar rather talk to your steel supplier or patience throw the bar or better use it to do some technical test, bevelling or otherwise.

Here are 8 ways the steel blade can fail irreparably due to a crack or quench cracking from heat treatment:

1 – The wrong design of the knife: as you know if you follow the blog I am very attentive to the design of the knife functional to the type of knife, as well as to the care of aesthetics that certainly has an importance to make it according to your style or target of people appealing.

There are many reasons why cracks can occur during treatment, but knife steels as well as tools are at greater risk due to their high toughness.

That’s why knife steel design is critical to reducing that risk.

Understanding how design can affect the risk of cracking and monitoring parts for design features that could promote cracks are the most effective ways to prevent breakdowns.

2 – Improper section of steel for the hardening and cooling process. In some ways it is linked to the design but also to the type of steel.

The edges of the knives are thin and thin metal fragments that are often found in the holes of a matrix when the processing does not pierce it completely.

Avoid carefully inspecting the blades before heat treatment and repelling or reworking them when the edges of the knife are detected.

3 – Overheating during the austerening part of the heat treatment cycle can cause fine-grained steels to swell normally.

Austenitization is a transformation of the crystalline structure of the steels, consisting of obtaining in the steel itself an Austerenitic structure.

Since austenite is a metastable crystalline form, it cannot exist at room temperature; Austenitisation is therefore the first stage of the treatment of: 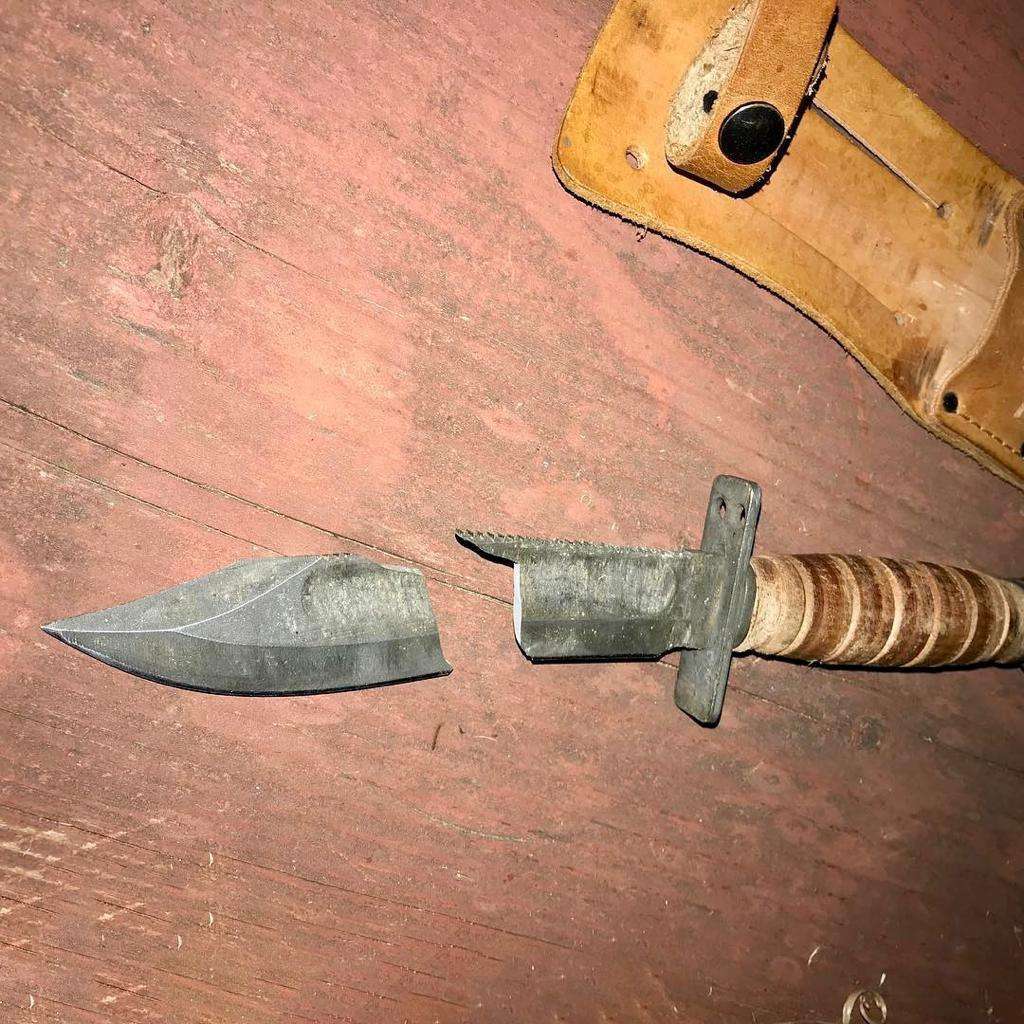 4 – Too much time between the temper and the discovery of the thermally treated parts.

Here are two philosophies that say that once cooled in oil or other method, the detection operation is done immediately or you can do even “the next day”.

Who’s right? If you want to test it, you’re free to do it.

A common misconception is that cracks in steel can only occur while the piece you extract from the oven is turned off to be abruptly cooled.

This they say that is not true, I use the word say because I do not have a direct experience of this, but in doubt I repeat you make the find on the same day or better as soon as possible.

If your work is not immediately tempered and found, rifts can occur (and will occur).

The ideal would be to have two ovens of hardening, one for the hardening and one to make the immediate discovery at the temperatures indicated in the data sheets but I understand that having two ovens is a cost and for this it often folds in the domestic electric ovens.

Surely for those who think that the discovery can be done even after many hours you can use the oven at the temperatures of discovery without using the electric oven.

5 – Improper cooling. Steel has its own characteristics and if you want to turn it off in water, oil, or some of your brine or caustic substance ok, they will make it the “hardest” steel ever seen but only if for that type of steel is recommended a certain type of shutdown after temper.

If steel is an oil hardening steel, the use of these liquids for overly aggressive cooling will lead to cracks.

So read the data sheets with the suggestions indicated because sometimes what always the best, is not for that specific steel.

Metallurgy is a science that must be studied and applied to combine experience and knowledge, you can experiment but always with consistency.

6 – Improper insertion/delivery of the blade into the cooling liquid.

There may be differences in cooling speeds that can be created.

For example, if your knife is totally immersed in a large shutdown tank then shut down horizontally or inside a tube vertically, causing it to cool down faster in some parts than others.

Some dip into the shut-off tanks by making light vertical movements, others horizontal once immersed, or those who turn off a sharp dive in the tube.

There are those who air-die between the aluminum plates, etc.

The size and geometry of the knife can also interfere with the speed of shutdown and the effectiveness of the shutdown.

Clearly everyone has his own method but then which one is the best?

7 – A removal that is too excessive or in shape before hardening in the original blade during processing and that you could have done after tempering by being careful not to overheat the blade.

This can leave cuts or other surface imperfections at the intersection that can act as a nucleation area for a shutdown slot.

For example, if you leave edges at 90 or V on the knife, etc.

This is easier for mechanical parts or tools to be hardened than on knives, but consider that if you have V’s on your blade, they can affect success.

As for excessive removal as you can imagine if you have parts too thin on the knife there is a risk that they will “melt”, so it is important that the section of the knife is constant or with gradual variations but never too thin.

For the thickness of the area of the beelecting before the hardening I made you a specific post.

8 – Welding theparts ofthe knife before the heat treatment can prepare the ground for rupture.

The intense heat of the weld puts considerable local stress on an area of a part surrounded by unsolicited parts.

In addition, if welding pools are not smoothed by processing, the rough shape increases the stress concentration, increasing the chance of a crack forming.

Finally, metal materials that are thermally treated at very high resistance levels such as knives or utensils, even if they have not turned off well inside the shape-bound cracks, may contain localized concentrations of high residual stresses.

If these stresses act in the same direction as the load applied in service of the knife or tool, an instant failure can occur.

Sometimes, however, it will be virtually indistinguishable that there is a crack or hairsleter after turning off during a visual examination, due to its “fragile” mode of failure, but some clues such as the lack of decarbonation on the surface of the fracture or with the tools of other forensic evidence of a failure of the process that usually do not have in a knife maker laboratory but in specialized centers with metallurgy experts. 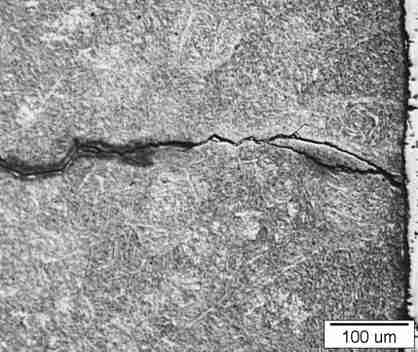 When a metallurgist observes the “failures” to cracking from tempering under a microscope, the cracks and tributaries of the cracks that follow the previous Austenitic grain boundaries are a pretty good indication that grain magnification and/or its causes such as overheating or too long at temperature have occurred. 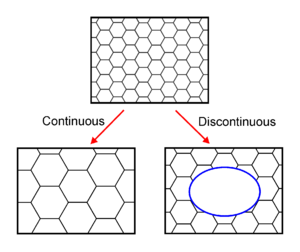 The scale of the hardening on the surface of the fracture helps the metallurgist to understand that the crack was present before the discovery.

Decarbonation may show that the crack was open before extinction.

As you can see in the image (even if it’s not a knife but a mechanical piece, when you have 90-degree or V-sections without rays there may be potential cracks.

The parts of the knife designed with a lack of rays are at greater risk of cracks.

The design of parts that gradually thin from one dimension to another and have well rounded corners reduces the risk of cracking as thermal treatment stresses are applied more evenly on them.

Surely the phase of hardening and finding the knife is an essential and delicate part of the success of a knife.

A failed temper is equivalent to a poor quality knife.

Sometimes it is not only the hardness achieved and detected with the hardmeter that certifies a good success of the temper even if it is definitely a foundation.

Today we have talked about cracks and cracks that can arise on the blade, but there are other problems such as the bending of the blade during cooling, failed tempering, steel decarbonation, etc.