Anatomy of a fixed knife and nomenclature 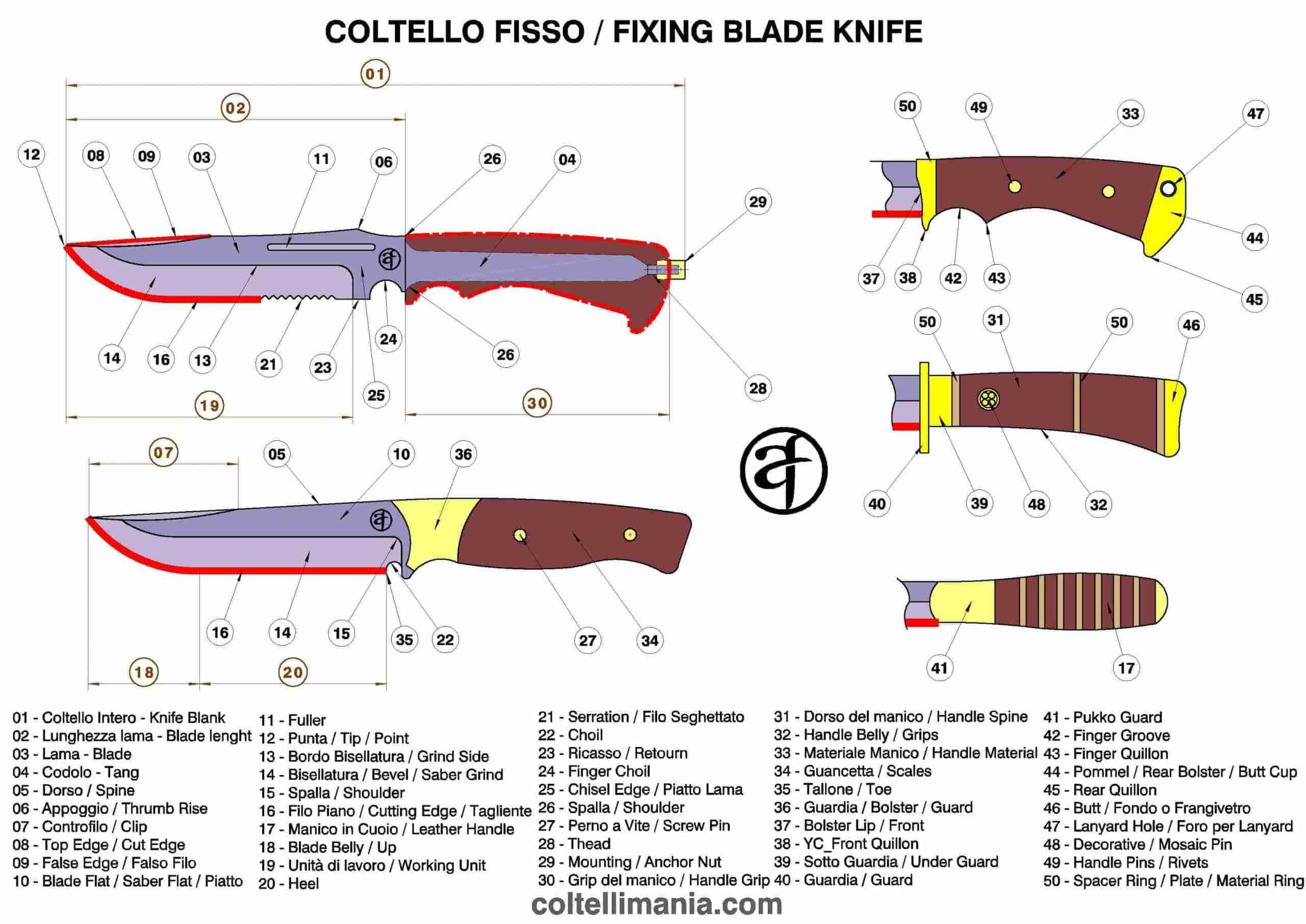 Anatomy of a fixed knife and nomenclature.

The parts that make up the knife are elements that you need to know and after analyzing in detail the profiles of the blades, types of cod and the most common beads it is important to go and see also all the other parts that make up a fixed blade knife and the types of shank.

I made you a scheme with nomenclature and variants to try to cover all the possibilities you have in most knives on the market.

This is important for the constructive choice of the knife and to know the different possibilities.

I also gave you a detail with the anatomy of a traditional kitchen knife.

This allows you to have more variety in the creation or offer your customers a wide panorama of choices, it is up to you.

Now I’m going to give you a review of a part of the nomenclature or if you want anatomy of a fixed knife but only the main aspects:

Anatomy of a fixed knife and nomenclature.

The tip of the blade (point or tip), together with the profile of the blade itself, determines the target use of the knife, the design, style and characterization of the shape of the whole knife.

The wire, the tip of the cutting edge, can be flat (plain

) or combo (combination of flat wire with serrated blade area).

It can also be present in the end of the blade back, towards the tip, a sharp or false counterwire (swedge, swage, false edge).

The purpose of the counterwire is to reduce the section of the area of the tip, to improve its ability to penetrate, without sacrificing too much thickness at the expense of the fragility of the same tip.

Back or coast (spines or back)

It is the thickest and most resistant part that gives the entire support to the blade.

The thicker or wider the back, use the word you like and the stronger the blade will be throughout its length.

It can be linear or radiated depending on the type of knife, you can insert filework, etc.

It is the extension of a portion of the blade that extends inside the handle of the knife and can be made in various ways (below a pattern with the main tails that you can find on a knife). 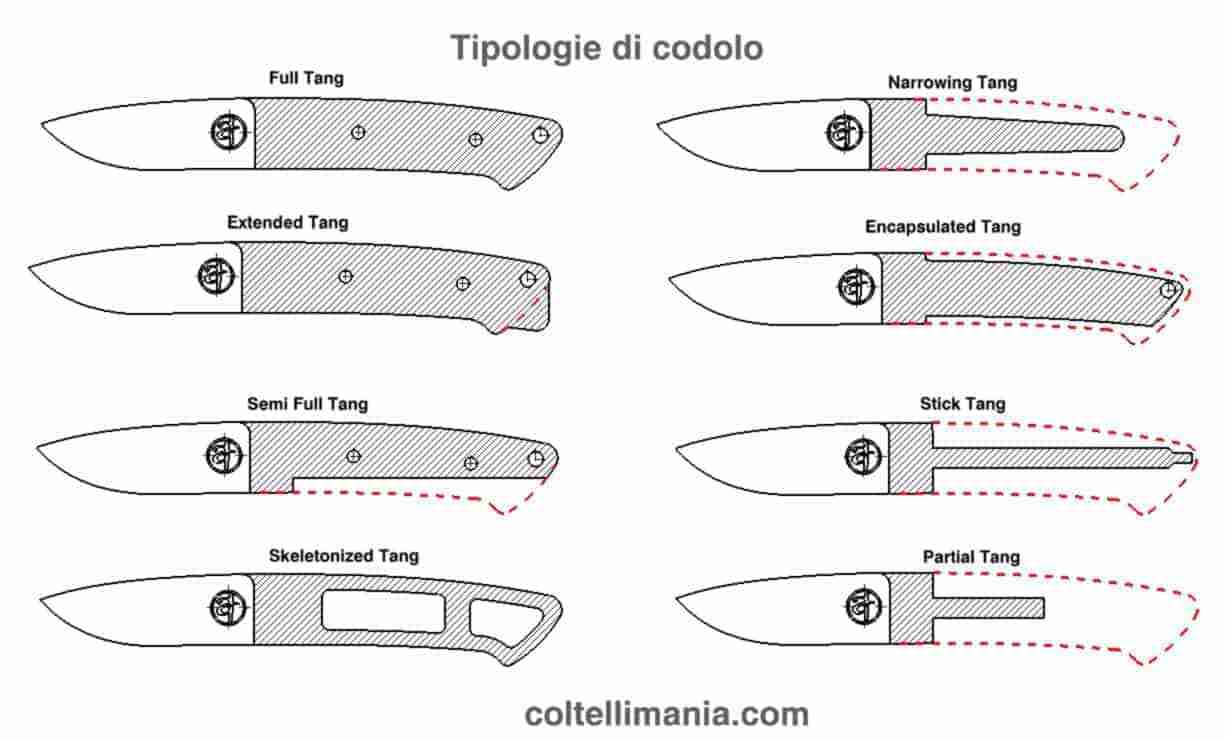 It is the area of the unbelieved blade (in which the maximum thickness is obtained) from which the shank (defined later) extends.

This shape is also the one that affects the bevelling radius and the ricasso is positioned before the guard (if any) or between the blade and the handle.

The term relapse was used in swords to indicate the area after the guard before the blade wire began.

The ricasso was also used to make advanced two-handed sockets but was then also used in knives where perhaps the term neck would be more suitable in fixed blade knives and heel in closable ones but the term ricasso was kept without distinguishing the type of knife and in folding knives the term tang is used (shank) to define the heel.

The heel (heel) indicates the end of the cutting edge, towards the handle.

It is a terminology that was used with kitchen knives where the blade at the end towards the handle had a shape similar to a heel, but today it is a term used in all types of blade to indicate the final part of the cutting edge.

So the ricasso is the flat part of the blade from which the cod is stretched out for each type of knife and the term heel (hell) is the end of the cutting edge.

The term choil indicates the carving after the heel that is needed to get to the limit the sharpening of the knife and that if you want can be formed also to accommodate the index finger of the hand to allow the advanced grip of the knife, in this case it is called finger choil.

It is the transverse and uniform tapereds of the blade that at the meeting of its tops form the cutting edge or directly the wire and the bead is the part that really distinguishes a knife. 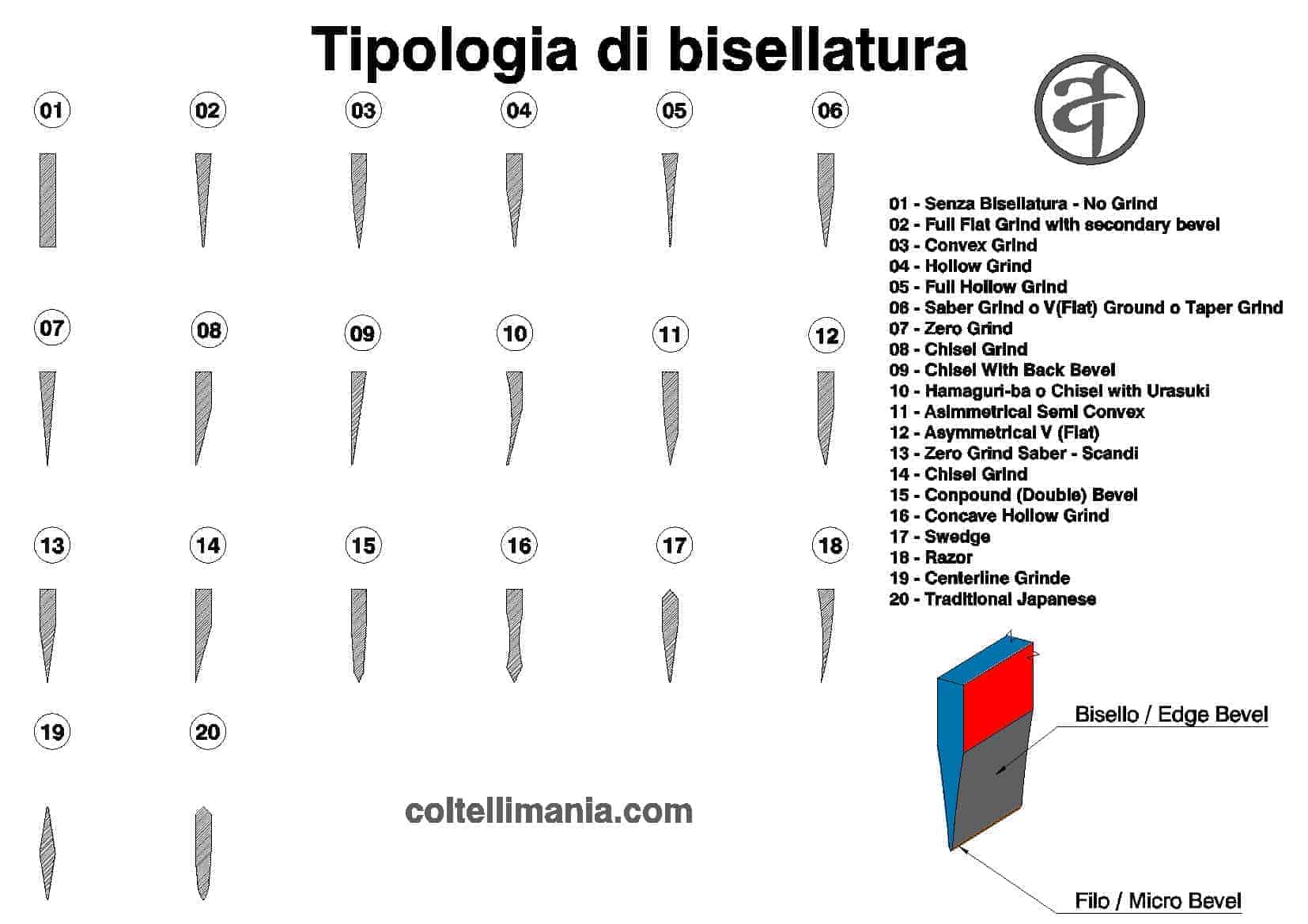 The fullers on the blade

they are grooves whose function is to lighten the blade without sacrificing its resistance but if made in a certain way especially on cutting weapons the size of swords, they not only had an aesthetic and weight function but also functioned as a blood drain to allow easy extraction of the blade after a lunge.

The handle is often framed by two badges called bolsters that have the function of mechanically strengthening the critical area of the knife between the junction of the blade and the handle but also often as an aesthetic factor being that you can play a lot shapes, colors and materials.

The guard (guard, quillon) or hilt

It is the fundamental element for the protection of the fingers both from sliding towards the blade during its use and that in combat knives is usually more pronounced to protect the hand both in attack and in defense.

Generally the guard is positioned transversely to the handle and blade and can be made in the most diverse forms, from the most essential to the most elaborate with shapes, designs.

In the traditional form the guard allows the use of the knife but in more extreme knives it is made with shapes that allow the specific use of the right or left hand.

These are collectibles or saber screens where a special ergonomics of use and protection of the armed hand is usually required and there are no changes of hand of the weapon itself.

It can be simple with the extension of the back of the blade, with a conformation suitable for the stop of the thumb (thumb rise or thumb ramp), taking advantage of the knife itself appropriately shaped but is often made with an added part grafted as is generally used in hidden cod knives in which the hilt is formed by a central part or solid,from a cruise (which is the central hole, point of the hilt through which the tail passes, and then from the top or bottom branches of the crossbar, or both sides that can have the simplest or most bizarre shapes (straight, curved, symmetrical, asymmetrical, opposites as direction, etc.)

Some knives and I’m not talking about the karambit are made with a ring in which to place the index finger (forefinger ring) to have a firm grip of the knife.

This technical construction that is seen in some combat knives has many disadvantages because it limits its use by trapping the hand, does not allow the passage in reverse grip and sometimes is inconvenient if not studied the ring tailored to the person.

It also does not allow easy handover but does not easily allow the weapon to fall in case of return of the weapon.

Anyway, you have a finger stuck in a ring that in the event of disarmament even if it doesn’t make you lose your weapon, it’s likely to break your finger.

The handle can be made of different materials and shapes and can be built with riveted or screwed cheeks, or made by injection molding of synthetic materials, or dug and planted.

It depends on the type of shank chosen and there may be fingergrooves,which improve the grip on the knife.

It is a protrusion of the bottom of the handle that comes out and is used in tactical knives to “punch” an attacker/enemy or to break emergency glass, or other percussive functions.

Another name that is used is skull crusher, skull splits.

The hole for lanyard in the end of the handle

There is often a hole on the knife to insert a piece of lanyard.

Generally used in large knives as a safety measure (placing it around the wrist) but also fashionable in closing knives to help pull the tool out of the pocket.

Now I’m sure that after reading the anatomy of a fixed knife and nomenclature you have a more precise idea of how a seemingly simple object like a knife actually contains many variations and technical details.

These elements cannot be overlooked because they are part of the choice of knife that is often made exclusively on an aesthetic level even if it contains many details that must be considered while drawing and carefully choose materials.

The choice of knife must become more conscious!