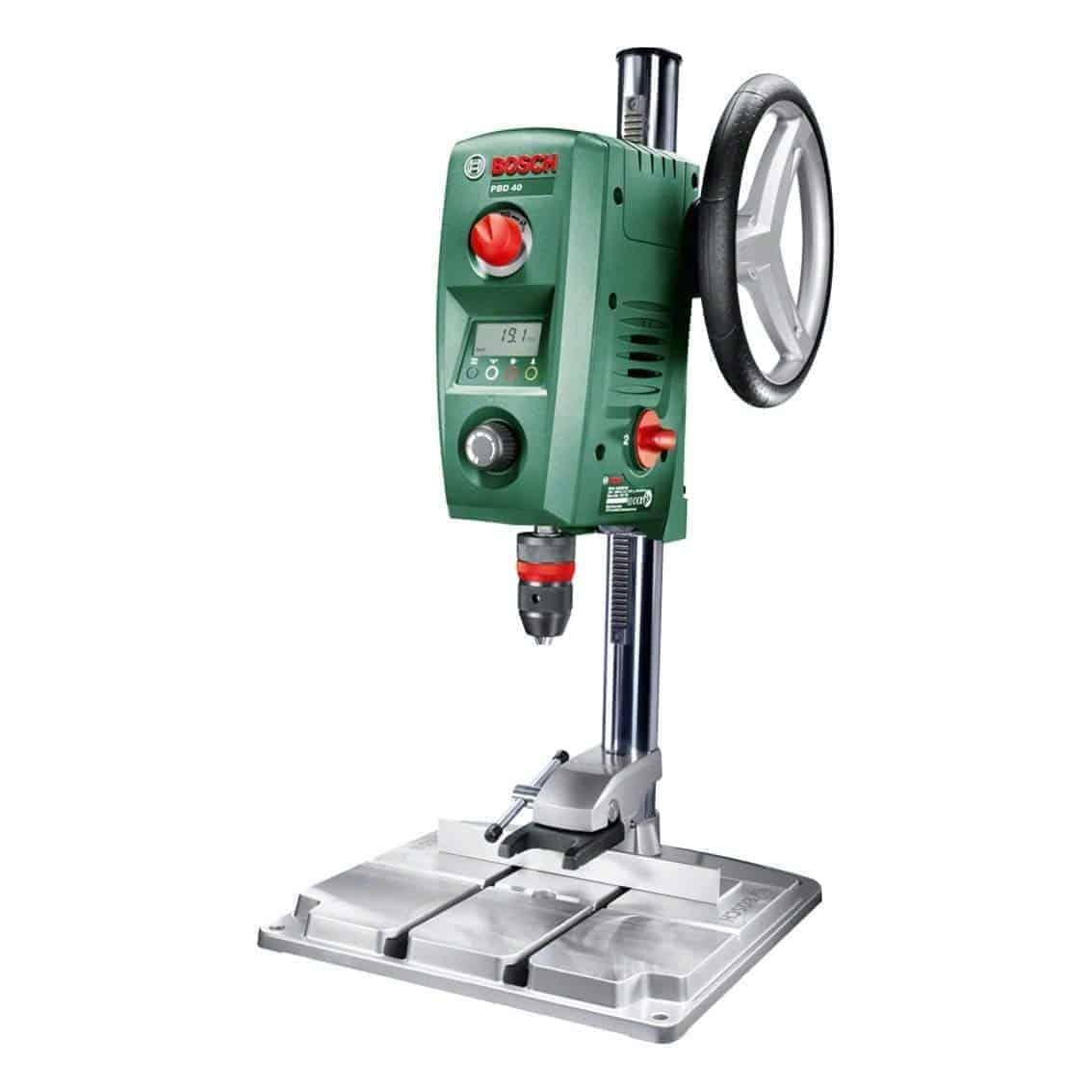 One of the tools you need to make knives as well as the sander is a good column drill and is a tool that can not be missing in your maker lab.

There are many on the market but a drill that I want to recommend is the bench drill of the Bosch PBD 40 which is a great tool for a knife maker laboratory.

I tried it in a friend’s lab and found it really functional and since mine is the classic diy drill made in china from 350W I decided after testing it to give me a gift and order it for my laboratory.

During the test I tried several characteristics of the drill, as well as drilling, locking the piece, a simple milling via a crossvice, the speed of the tip change, etc.

There are no straps to adjust!

The PBD 40 has two mechanical speeds, high power in the 1st speed and instead a high number of laps in the 2nd speed,and you set them up via a selector.

The digital display makes it easy to read the precise drilling depth and also set it with the help of the depth rod,for holes in series. 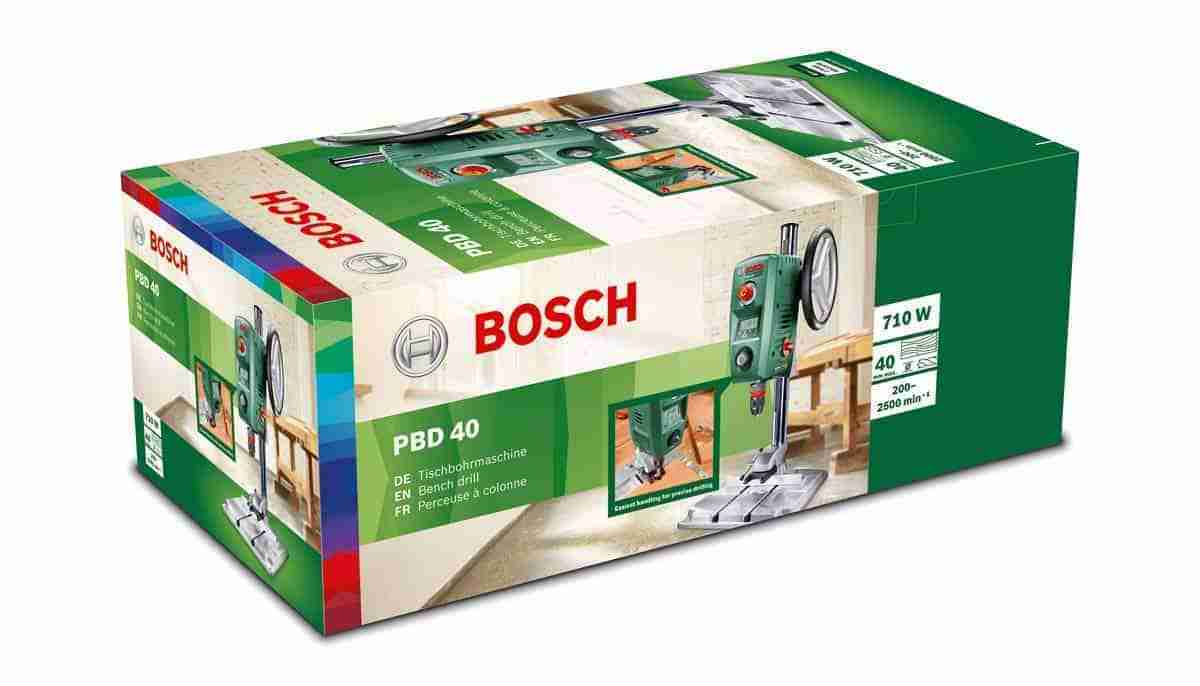 The cost is about under 300 euros. 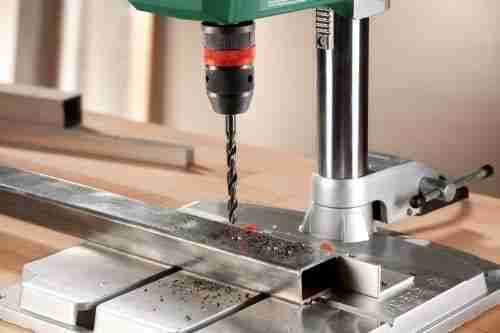 The PBD 40 is a bench drill for hobbyists and knife makers who need to make high precision drilling and is much more suitable than the classic Chinese drills with 350 W of power and with the adjustment straps that you find in DIY and DIY stores.

Thanks to its technical equipment, the tool is particularly precise and very easy to use and for this reason it uses a universal 710 watt engine that has replaced the classic belt transmission of traditional over-the-counter drills that forces you to change the torque and speed ratios by hand.

The PBD 40 is also equipped with two speeds and theConstant Electronicfunction, which prevents the decrease in speed when drilling in hard materials, ensuring a constant number of laps; The latter can be precisely adjusted thanks to the electronic indicator in the digital display.

The PBD 40 bench column drill, with the Bosch digital display

A functional equipment for excellent accuracy 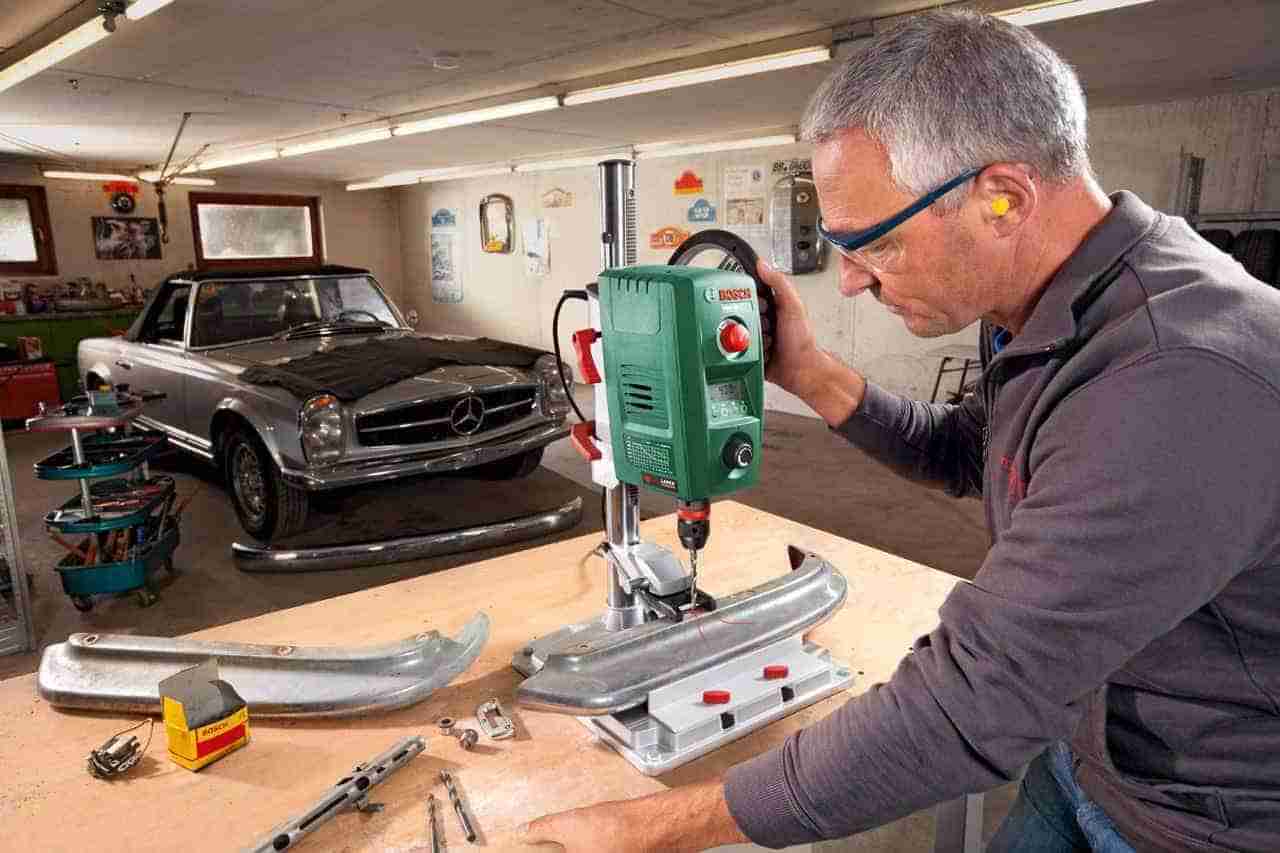 The PBD 40 bench-column drill allows for a very flexible use: from the construction of furniture to modeling, from DIY to restoration work.

On the digital display you can see at any time the number of turns selected and the depth of drilling reached:“so you can better control the drilling process, further facilitated by the help of the integrated laser”.

The LED provides good lighting of the work area.

The tip is lowered by adjusting wheel with Softgrip coating and is held by a high-quality fasting spindle with a safety ring, which prevents it from jamming.

Unlike hand-guided drills, the tip of the PBD 40 always penetrates vertically into the workpiece.

The drill is equipped with a built-in laser, for very precise punctures 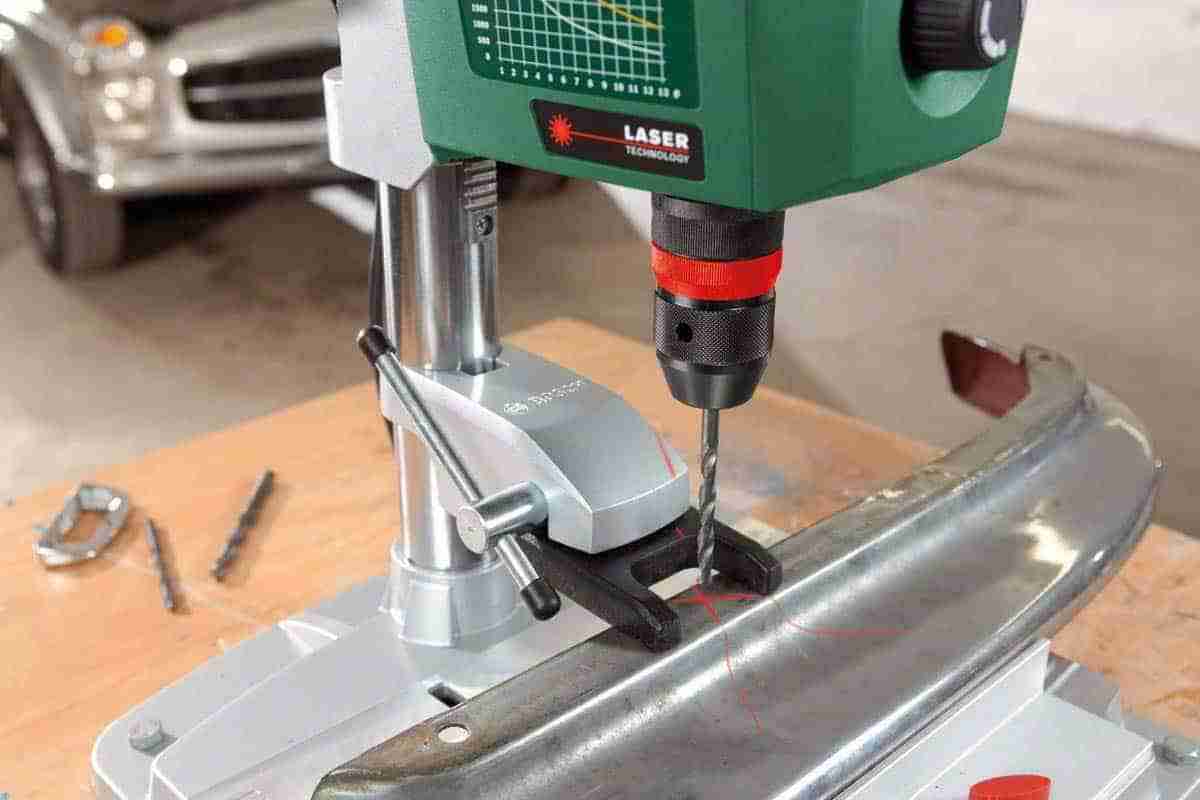 The 710-watt engine offers great power; Moreover, thanks to its support system, the entire engine block follows the movement of the tip during its lowering: this allows to keep the working height constant, without having to correct it, as otherwise would be necessary to work small pieces.

Two-speed gears offer high power in the first speed and a high number of laps in the second speed.

The high-quality precision spindle, adjustable without the use of keys, automatically tightens the tip in proportion to the cutting force, maintaining constant tightening force even in the most heavy uses.

The parallel guide and the large worktop of the PBD 40 allow you to position the workpiece accurately and safely.

The drill is very solid and heavy, it guarantees excellent stability.

useful to have the digital depth meter, maybe more a gadget than anything else but it works perfectly, and it is very precise.

It is not very bulky

compared to other column drills but is slightly noisy being equipped with gear transmission.

The speeds are adjustable according to a comfortable mechanical lever and, later, using the knob for electronic regulation.

The display is very clear and allows you to consult the processing depth and the speed of rotation.

The spindle has two locking systems, and

is discreetly precise given the cost of the machine and is extremely precise and comfortable, keeps the tip or tool tightly tightened without having to resort to tools to tighten the grip, it is really well made.

With a “click” rotating a special red die, the tip or tool is blocked or unlocked.

There are two buttons to illuminate the work area and for a laser, although the laser does not guarantee maximum accuracy, but still allows you to make the first adjustments to understand where the tip will go, to be recorded better.

It has a soft boot, a useful emergency fungus to stop the engine in an instant if necessary.

Now as reported by other users the spindle axis has a very small, but very microscopic game on the horizontal plane.

It’s almost imperceptible, but it’s there.

Drilling purists will turn their noses up, but we have to think that we are not talking about professional equipment even if “not exactly” cheap.

You can use it with glass cutters on steel bars as a milloner on a cross grip to do small processing on knives.

If I hit an abrasive swab, you can use it as a sander.

Definitely an interesting tool and I didn’t expect so much technology and precision while you’re drilling tells you the speed of rotation, but most importantly it tells you depth up to tenth of a millimeter.

The laser and light help you during the drilling operations and the wheel that causes the drill to come down is very comfortable because before you drop the car through the unlocking of a knob and spinning the wheel, then it freezes and at the desired height , and turn the wheel to drop to the tenth of a millimeter with the caliber on the display, really accurate!

For precision jobs and for the price category it is really great the value for money.

This is a great column drill.