The Deba knife is a particular Japanese knife that takes its meaning from the translation into protruding blade particularly suitable for filleting fish and dissection of poultry and small bones.

It is a powerful knife , which is mainly used as a cleaver.

In Japan it is often seen at the fish market and by restaurateurs who work with whole fish.

A sort of small cleaver, the Deba, Japanese knives for fish and meat!

Due to its blade sharpened only on one side, it has been designed to thread, peel, bone and cut fish, but this interesting oriental tool has characteristics that also make it, in some cases, similar to a meat cleaver.

Expert sharpeners prefer different sharpening inclinations, depending on the position in which the blade is sharpened; If you are closer to the heel the angle widens.

However, this is a difficult thing to do for an ordinary cooking enthusiast or for those who are not more than experts in sharpening.

As already mentioned earlier, this tool generally has an asymmetrical blade with “Shobu” sharpening (only on one side) and holding it in the hand it is immediately evident its weight and strength.

It has a thick rib, which drops in thickness from the handle to the tip and as you descend from the coast towards the wire.

It is held differently depending on the use that is made of it, this is because it can be used as a Yanagiba or hammer as a cleaver.

In some versions it also has a symmetrical blade and there is also a version with a European-style handle called “Yo-Deba”, made mainly for the Western market.

The versions also change according to the length and thickness of the blade and in some models with the symmetrical blade it looks very much like a heavy weight chopper.

The Kako-Deba or Usudeba is the one used by fishmongers, but there are also versions:

The Deba is perhaps the most representative of the Japanese knives, sharpened only on one side and is used to fillet fish or to slice certain meats.

, kitchen knife, modified to make it better pronounceable in the composite word), with its ideograms, literally means “protruding blade”.

In Japan there seems to be a legend that derives this name from the blacksmith inventor of this blade nicknamed “Deba” for its protruding teeth. 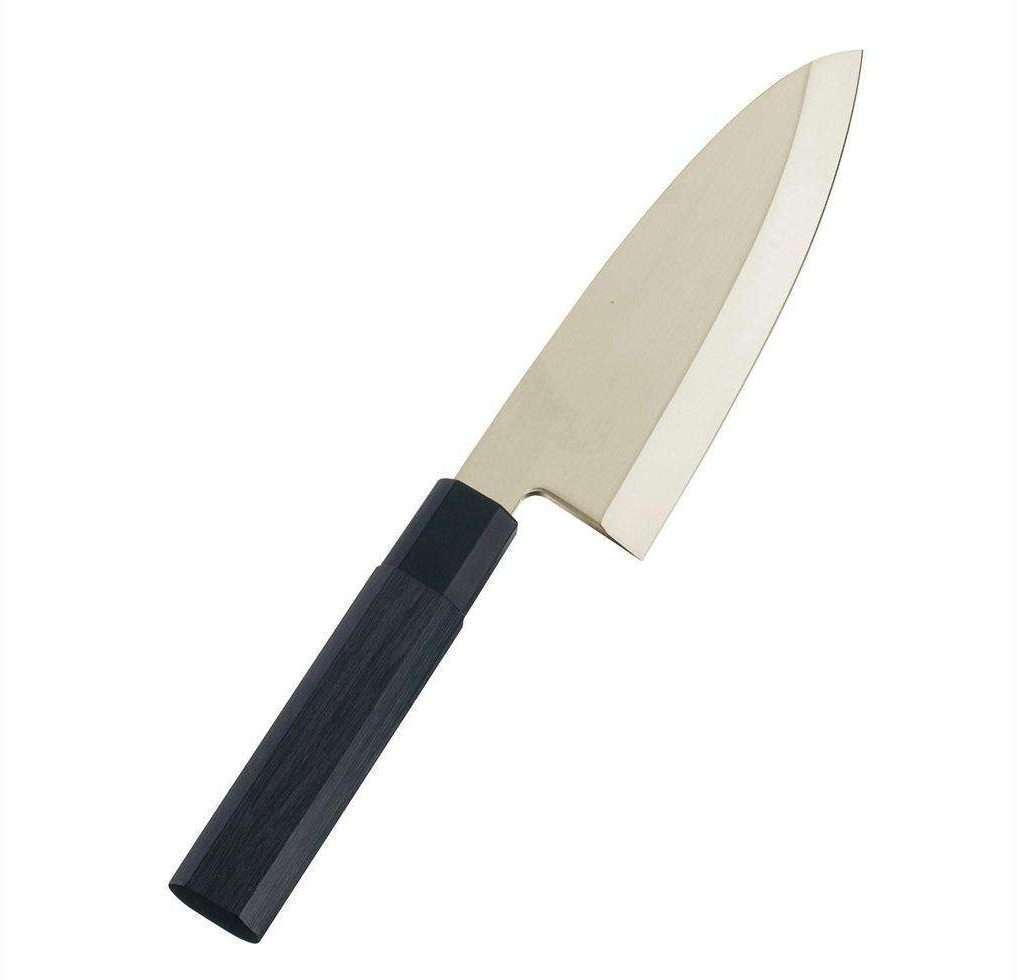 In fact, Deba can also have this meaning.

It is the most massive knife and is similar to a sort of light cleaver.

It is used to cut bones or small bones in the part of the blade near the handle, while from the middle to the tip to row medium/large fish.

For the particular shape it is the most classic among the Japanese kitchen knives, the most stereotyped, the one that every self-respecting gaijn wants to bring back from a trip to the rising sun and then show it off with friends at the first opportunity.

In deba-bocho, however, it is a fairly particular knife, an all-rounder but with characteristics that make it a knife to know to use it well.

The main feature is to have a very thick and heavy blade with an asymmetrical section: on the one hand, the blade plate is on one side convex (rounded) and on the other side it is flat.

The weight and thickness of the blade also allow it to be used to cut and engrave bones and cartilage without too much difficulty and without the fear of ruin.

This, together with the blade that for the particular shape is to be rather distant from the handle, serves precisely to facilitate the cutting of fish or meat into fillets or slices.

The deba bocho is not an ambidextrous knife, the asymmetrical shape means that left-handers have to buy one made especially for them.

Even in sharpening, precisely because of the asymmetry of the blade, particular attention must be paid to the inclination with which the wire rubs on the stone, inclined from the domed side, flat from the straight side.

As with the Usuba, the blade section is asymmetrical and trapezoidal in shape, with the flat side actually concave (urasuki).

There are various lengths that can reach up to 30 centimeters and also in this case left-handers must request the version dedicated to them, since the sharpening of the cutting edge is of the “kataba” type.

The handle can be with the chestnut section, as well as ambidextrous.

A grinder must always take care to respect the right angles of the cutting edge. 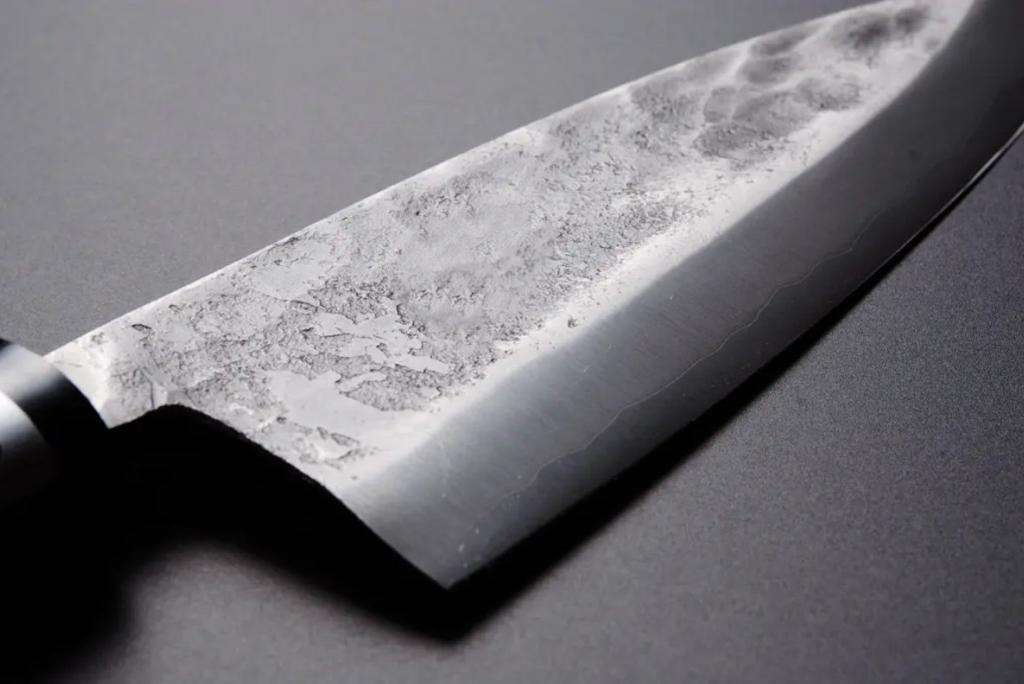 Chisel grind or single-bevel grind is the typical one used on Japanese kitchen knives.

In this configuration the blade is bevelled only on one side and in Japanese knives it is for right-handed knives on the right side and inverted on request for left-handers.

The bevel of the worked side is flat and can have a micro thread or not have it as in Japanese kitchen knives.
The angle can vary depending on the thickness of the blade and the cutting capacity you want to achieve and the strength of the blade, so as you can imagine the same type of bevel changes according to the type of Japanese kitchen knife to be created and what specific task the blade is intended for as use.

There are mainly three types of shapes:

Clearly the handles are made of very different materials ranging from wood to synthetic materials, but we must distinguish the traditional method from the needs of industrial knives, to get to the creations of makers who indulge themselves by experimenting with innovative materials to give an even more impactful aesthetic or for specific customer requests.

Is it just a fad? Certainly not to the point that even many Western makers have started to produce Japanese kitchen knives and some specializing in the realization of kitchen knives.

The customer who asks for these knives knows what he wants, looks for high quality and knows that they are often real jewels.

The Deba knife is perhaps the most representative among Japanese knives, sharpened only on one side and is used to filleting fish or to slice certain meats and can not miss in the kitchen of an enthusiast and among the knives used by a chef.