How to remove rust in kitchen knives

Even if your kitchen knives are made of high-quality stainless steel, it does not mean that they will never rust, it happens that small rust stains may appear.

Washing kitchen knives in the dishwasher or sink and leaving them for a long time without drying them, could be one of the main reasons for the formation of rust.

Rust is a spontaneous compound consisting of various iron oxides, hydrates and basic carbonates of Fe(III), reddish-brown in color.

Everyone knows the rust that develops on ferrous materials like a lumpy patina with a characteristic reddish color, but not everyone knows why it is formed.

It is a spontaneous compound generated by the oxidation process of iron, in the presence of oxygen contained in air and water.

Rust originates from the oxidation of iron: for its formation the presence of oxygen is necessary.

The chemical formula of the reaction involving Fe and H2O is as follows:

The good news is that in most cases rust can be easily removed at home using, products easily available in stores.

How long does it take for rust to form? Surface rust!

If there are salts on the surface, they dissolve in the water to form an electrolyte solution and a corrosion cell will form.

This fast-acting attack can cause visible rusting in just 30 minutes.

Why does rust appear in knives?

Rust is the result ofiron oxidation caused by prolonged exposure to water without them being properly dried.

Any metal that contains iron, including steel, will bind with the oxygen present in the water forming a layer of iron oxide or more commonly known as rust.

If you have deep scratches or abrasionson your knives, these areas become perfect for the formation of rust.

If you notice rust stains on the knives, it would be best to remove them as soon as possible to avoid further damage. 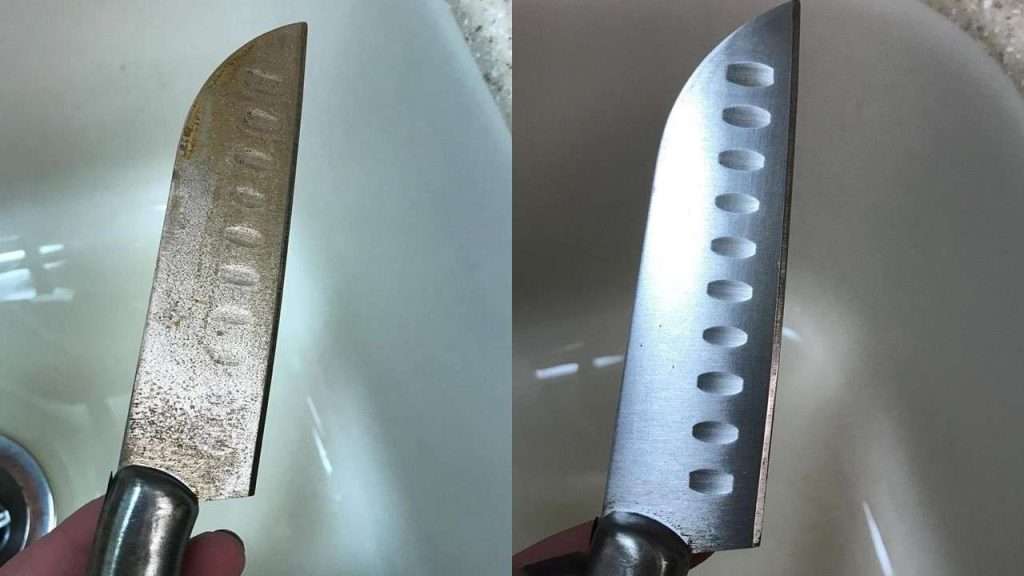 Methods to remove rust from your kitchen knives

Put a little fresh lemon juice in a deep glass or container where you will leave the knife immersed for a few minutes.

The acid in lemon juice helps to dissolve rust from the knife blade, thus making it much easier to remove it with a sponge.

A rather particular solution comes from potatoes.

Oxalic acid in potatoes helps to remove the formation of rust.

Take a potato as large as the length of the blade (you may not find large potatoes for certain types of very long blades, so use 2 or 3) and push the blade inside the potato and leave the knife in this position for a whole night.

After about 12 hours, at this point remove the potato and rub with a cloth to remove rust.

As with other methods, let the knife soak in vinegar overnight and then rub the areas with rust stains.

You can simply soak the metal object in white vinegar for a couple of hours and then scratch the surface.

If the object is too large, it will be enough to pour this product evenly on the surface of the object and let it act.

The best vinegar to use is apple cider vinegar rather than white vinegar, which works the same, but does not have the same effectiveness.

Baking soda has many uses in the home and one of them can be used to remove rust.

You need to take at least 200g of baking soda to mix with water to form a paste that has the same density as toothpaste.

Now apply this paste on the blade of the knife and then rub the part with a cotton cloth but be careful not to cut yourself.

Repeat this operation until the rust disappears.

Avoid using very abrasive sponges, so as not to create further damage to the knife.

There are other more extreme methods to remove rust from kitchen knives but they are methods that are usually performed when the knife is to be restored or rust has really covered the blade in an important way.

For this reason, tools such as the grinder, the belt sander or even with the electrolysis method are usually used, but to be honest if the knives are so rusty and are not of value it is time to throw them away (unless they are vintage or you are fond of that blade for some particular reason).

Once the blades are back as new, remember to dry them right away.

Sometimes it is also necessary to do a good job to disassemble the handle to perform a real restoration of the blade and then reassemble it or replace it with a new one, it depends on case by case.

If you want to keep the blades for a long time rust-free pass a drizzle of cooking oil.

As you can see there is no need to worry if you see some rust on your kitchen knife but surely you have to make a habit of drying the knives after you have washed them and not leaving them wet for a long time.

If you liked what you read and it was useful to you before you left the page share the article via the social buttons you see at the top and comment. Thank you very much! Important! I still ask you for a little effort but for me it’s useful for the project, click I like it on Facebook page and at the Instagram channel.