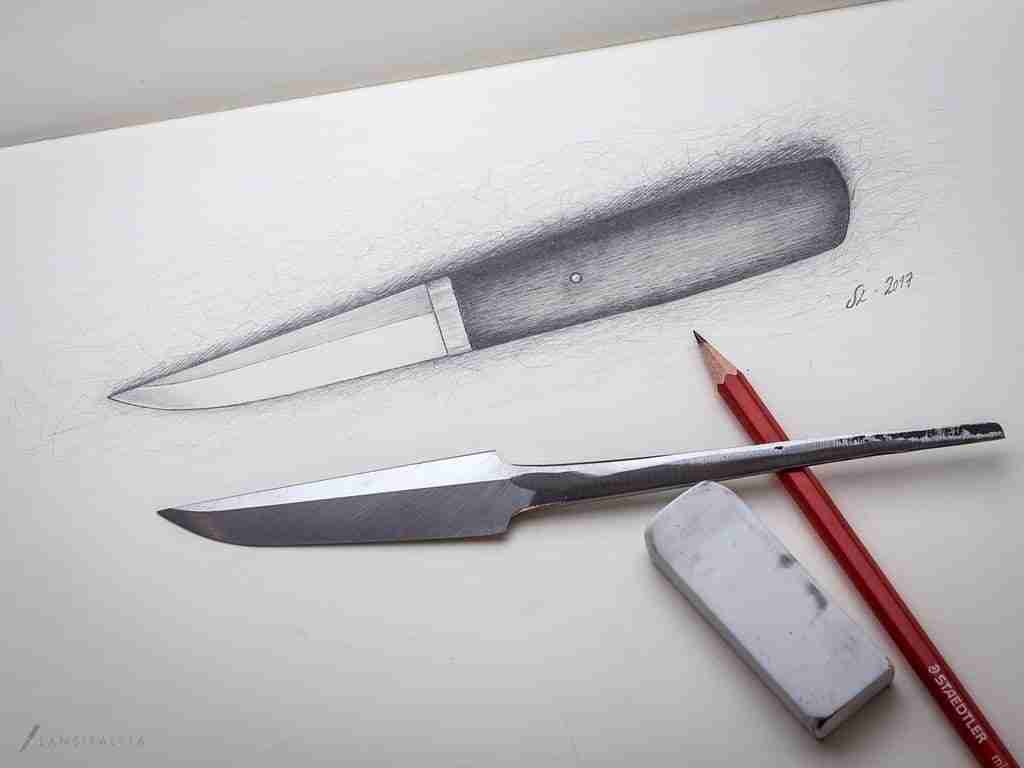 The Finnish
puukko
knife ( ) is
a
type of traditional knife born for hunting and carving.

I really like it for its functionality and simplicity, a knife that is pleasant to use and very versatile.

It has a single-edged solid blade with a slightly curved cutting edge and a straight back.

It is kept in a scabbard normally sewn on the back that covers it for 3/4.

As you know one of the things I like to do are case studies on knife types or industrial knives that have found in the market a broad response for their shape,for their quality or other.

So you’ll often find on the blog analysis on certain types of knife or industrial blades to better understand the choices of the makers and the building qualities.

But now let’s go back to the Finnish knife that I chose to analyze today, the puukko.

There are similar equivalents in Sweden and Norway, where they are called brukskniv and tollekniv respectively.


The first Scandinavian knives date back to about the 1st century,after the arrival of Germanic populations coming into contact with the finnish indigenous peoples.

In support of these theses, it has also been observed that the word “puukko” has considerable similarity to the Saxon Pook .

In the Middle Ages national stylistic differences began to develop:

Swedish knives and Norwegians are generally a little more massive and chiseled lower, the puukko are slightly more tapered and biselled higher.

Looking at historical specimens it is clear that the shape of the puukko has remained roughly unchanged over the centuries, while developing a large number of regional models.

Kauhava,in Ostrobotnia,is classically considered the “capital of the puukko” because of the large number of blacksmiths and companies that have operated and still operate there today.

Throughout the Fennoscandica peninsula, the gift of a knife to a person has been, and still is to a certain extent, a gesture rich in symbolic meanings.

Parents, for example, give a son a knife when he reaches the age of majority; the knife must be delivered on the side of the handle in a sense of trust.

In rural areas it is still common for a child to receive the first knife around the age of 6-7 and are then taught the first rudiments of carving.

Around 1850, Tommiwas born in Finland.

Finnish purists consider it the puukko par excellence, in its maximum stylistic and functional expression.

Distinctive features are the rhomboid section of the blade, the “crested” knob and, according to some, the colors of the sheath.

The diamond section, actually very pre-Tommi and born from the habit of the blacksmiths to forging blades even recycling lime.

This shape allows you to have a solid and light blade at the same time, having the relatively thin back and the thickest point at the attachment of the biselli.

The type of steel

The usually used steel is the so-called silversteel,steel with 1.2 carbon in composition and currently produced by The K510 and TyssenKrupp as 115CrV3.

The puukko was a loyal companion of Finnish soldiers during the Winter War as both a utility knife and a white melee weapon.

In more recent times, traditional puukko has been used as a source of inspiration by designer Tapio Wirkkala.

In the early 2000s, as a base for the development of the Finnish troop ordinance knife, the Ranger Puukko,designed by Captain J.P. Peltonen and produced by Fiskars.

Some examples of puukko: 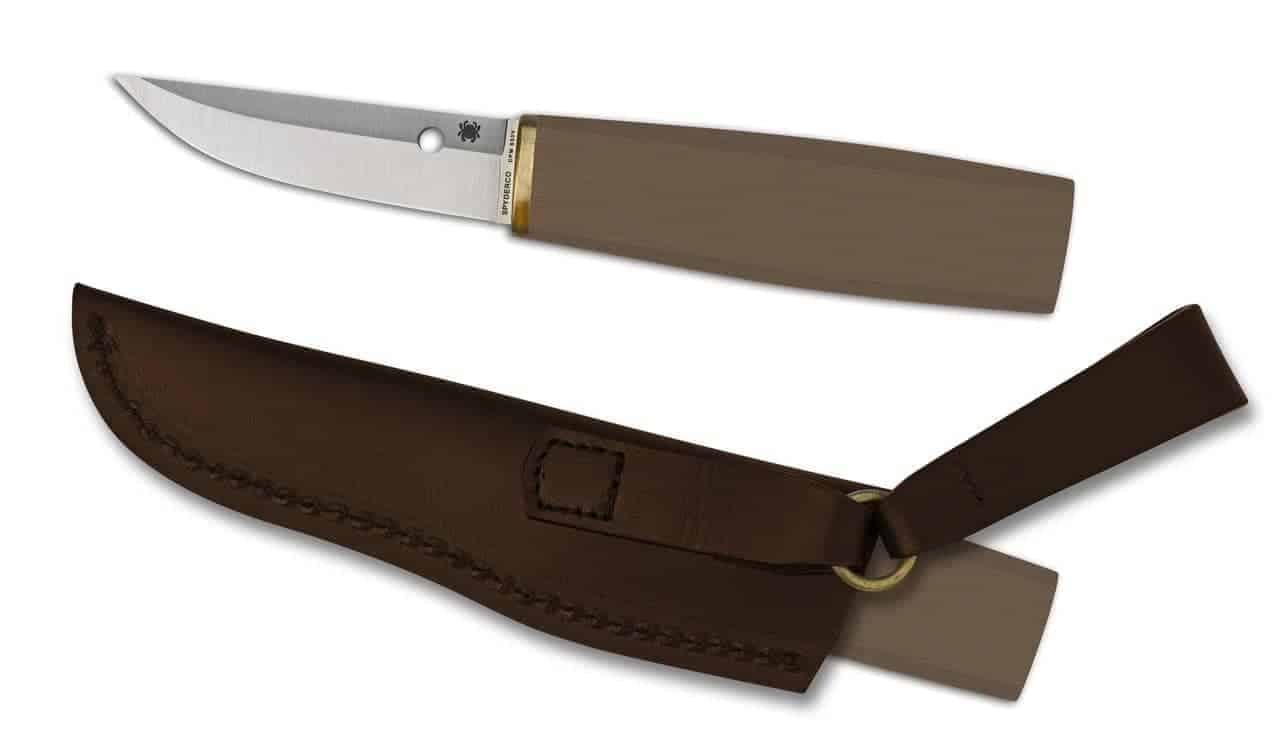 Sissipuukko,
under the Finnish Army. 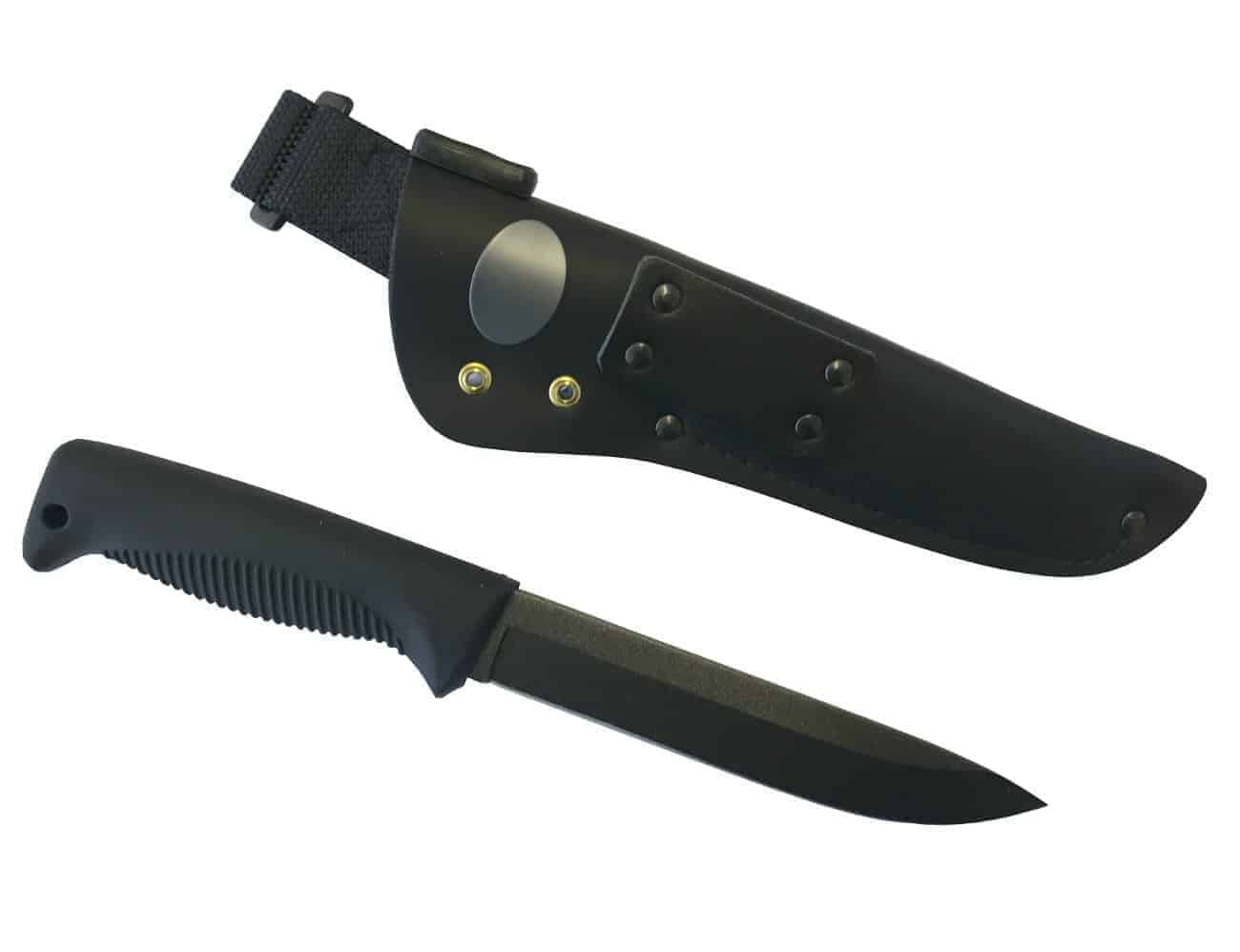 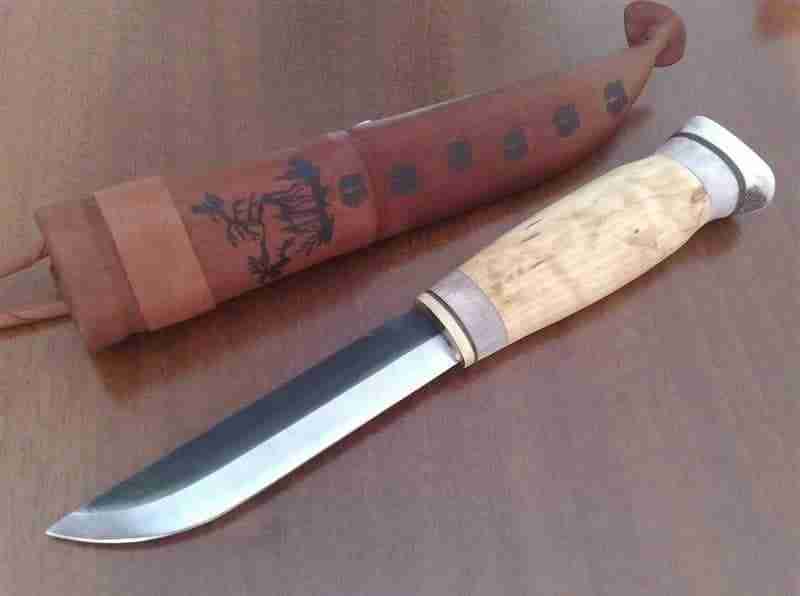 The usually used steel is the so-called silversteel,steel with 1.2 carbon in composition and currently produced by The K510 and TyssenKrupp as 115CrV3.

Relatively frequent one is slightly tapered both in thickness and in height according to the final use to which it will be destined.

At the discretion of the manufacturer, the point may be slightly hooked or smeared.

The shank, depending on the style being built, can simply be glued or riveted on the knob when it is as long as the entire handle.

The bevels are flat or slightly concave, often with a small microbisello, flat or convex, forming the real cutting edge. 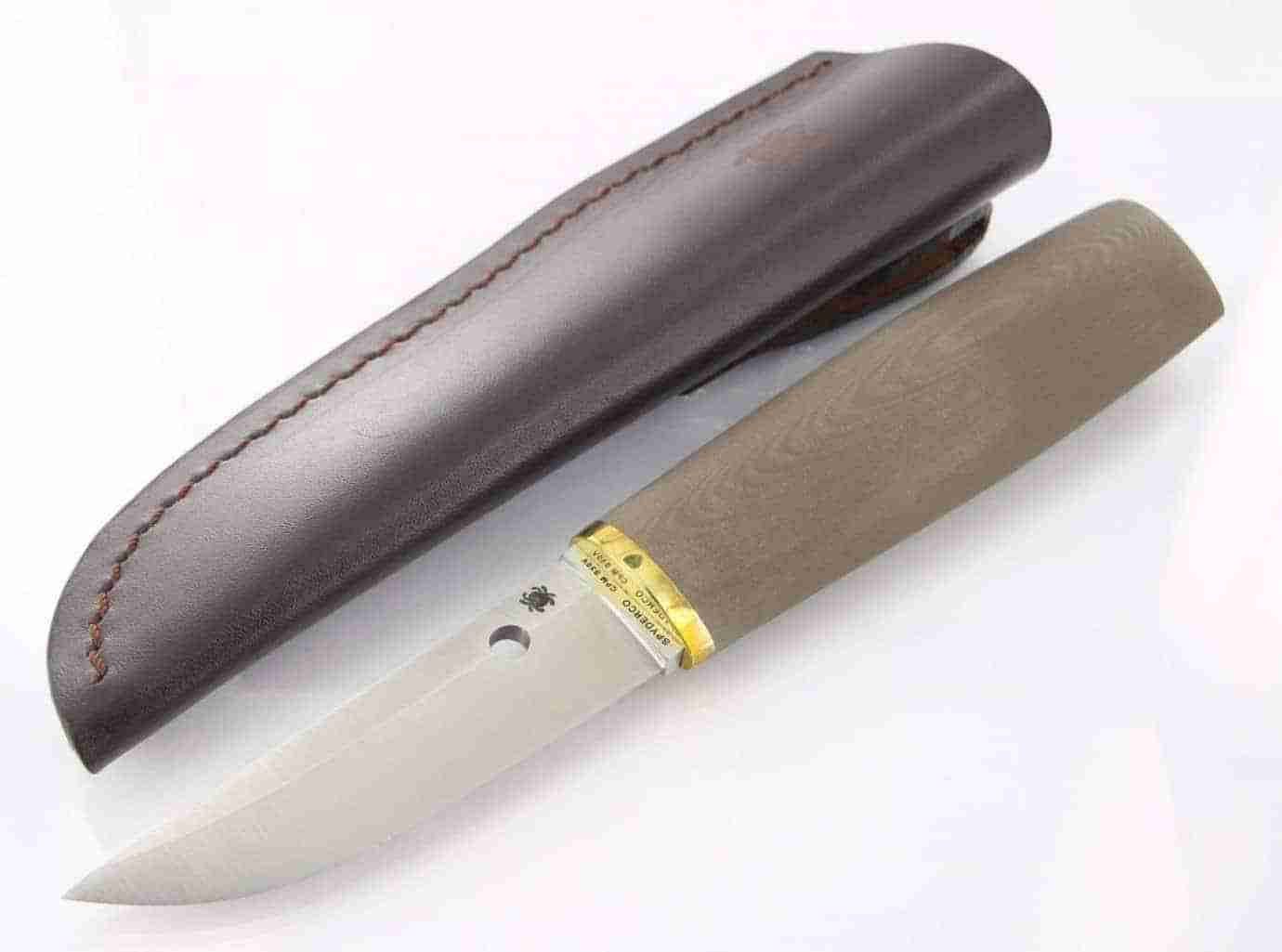 The handle is usually cylindrical, with an oval or “drop” section, without guard or grooves, it may have a pommel more or less markedly hooked in some regional variants.

Almost always built of wood even if they were made, especially in the 30s and 40s, bachelite handles. 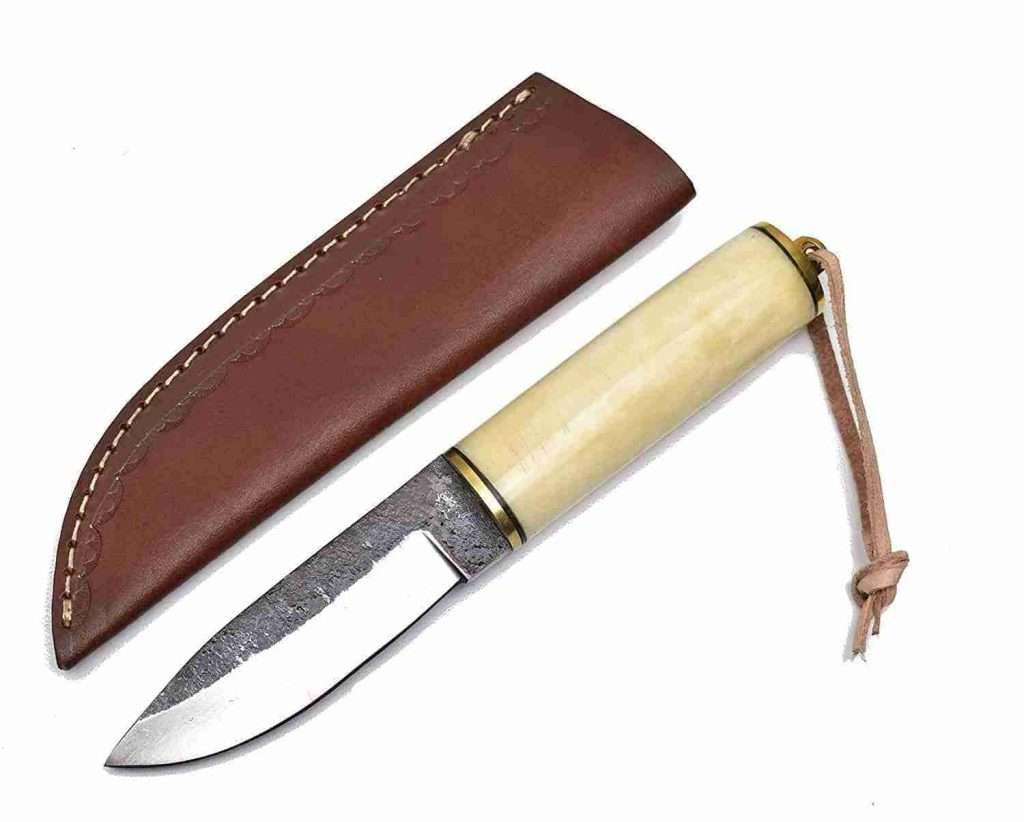 The most used wood is birch,but it is not uncommon to also find willowhandles, sometimes in ash and juniper.

It is also possible to see knives with handles made of birch bark disks pressed between two brass plates, or in leather. 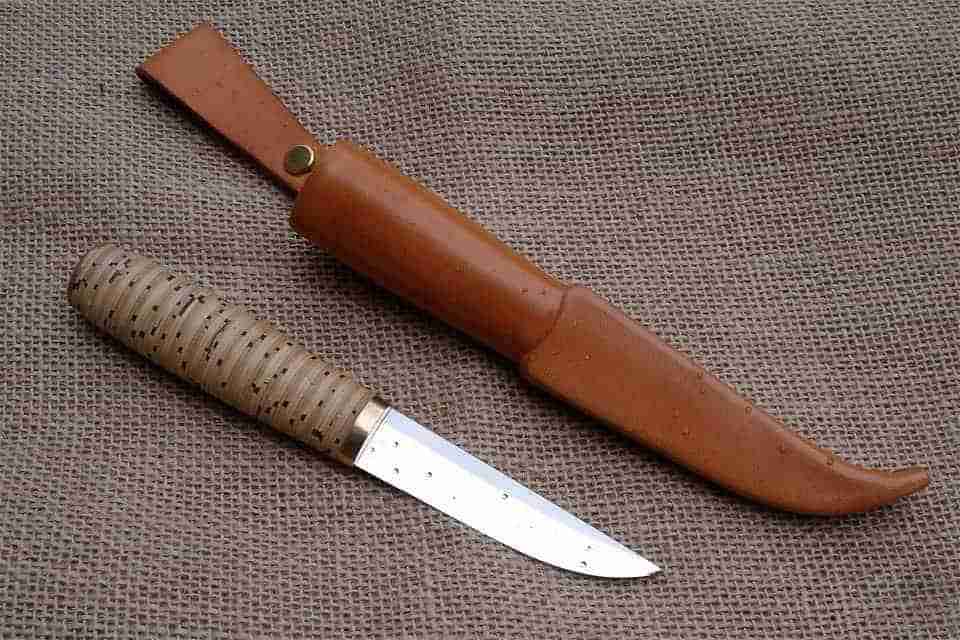 The lining of the puukko, in bovine leather, is sewn on the back is has inside a wooden or plastic lifejacket to protect knife and user during transport. 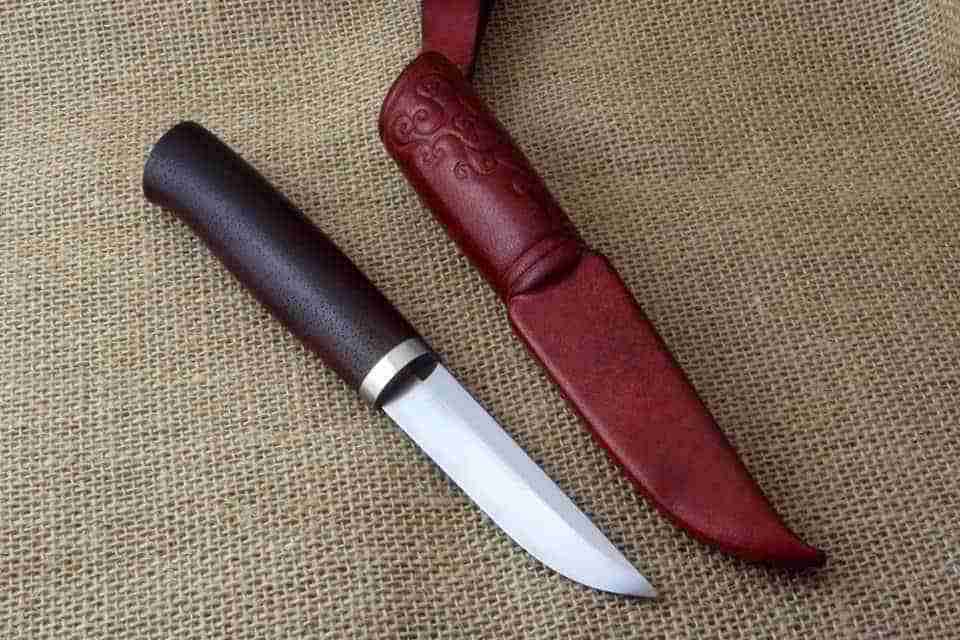 It almost entirely contains the knife, leaving only the knob and a small part of the handle exposed, so as to protect it from the elements and minimize the risk of falling or loss. of the knife. 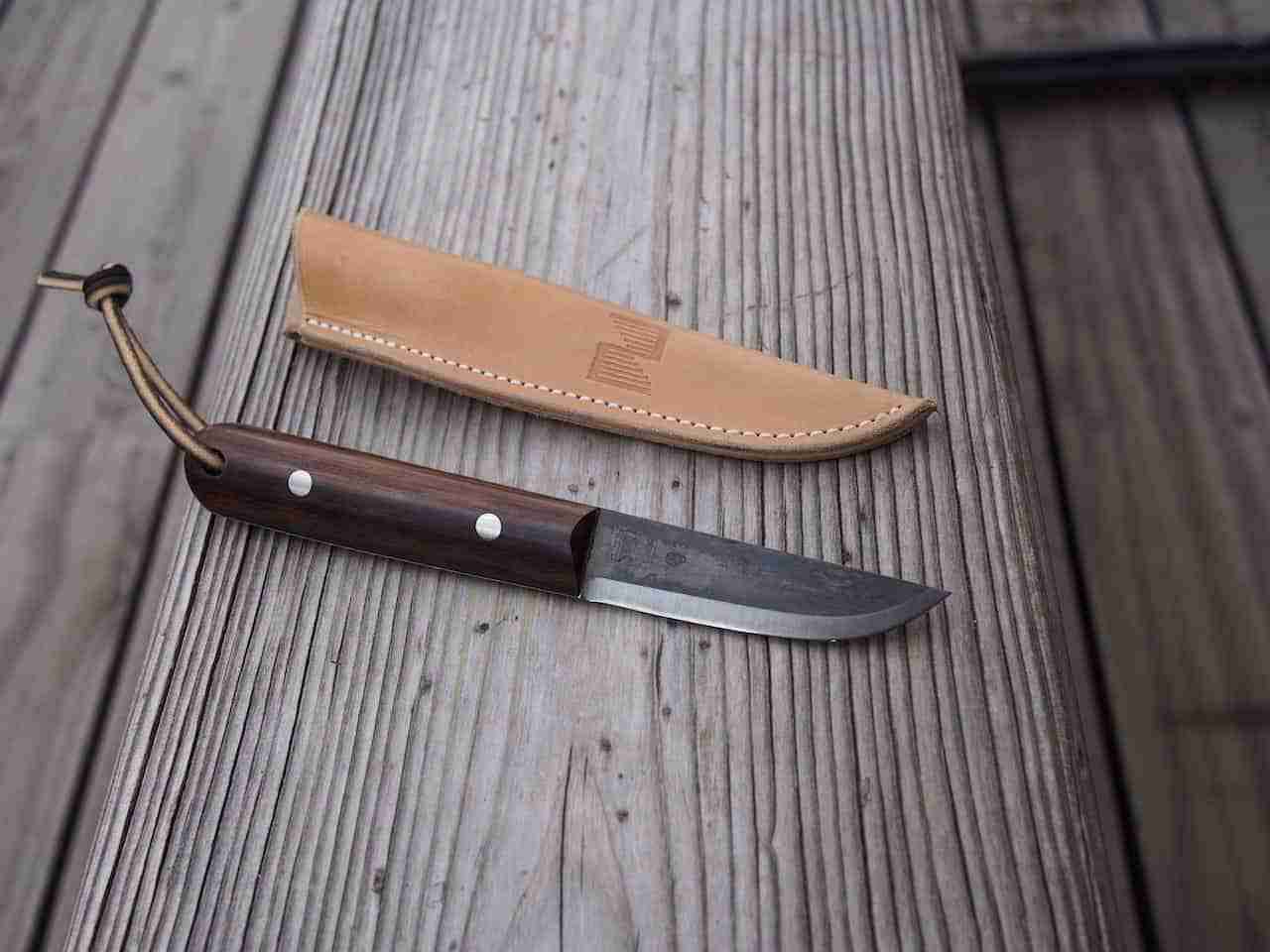 Consider that each maker makes its own interpretation of the puukko also to give a personal touch and as a result there are no strict rules and you can still play with the dimensions and characteristics of the puukko.

My version is revised as details and bisellatura (isoon attach images in 2020 with the satirical design, before I want to make it myself).

The puukko is a knife that you are fond of hiking in the mountains or bushcraft you should try because it is a versatile knife and very pleasant to use.

Building from its satisfactions as well, because it is a fast knife to make and allows you to play with creativity.