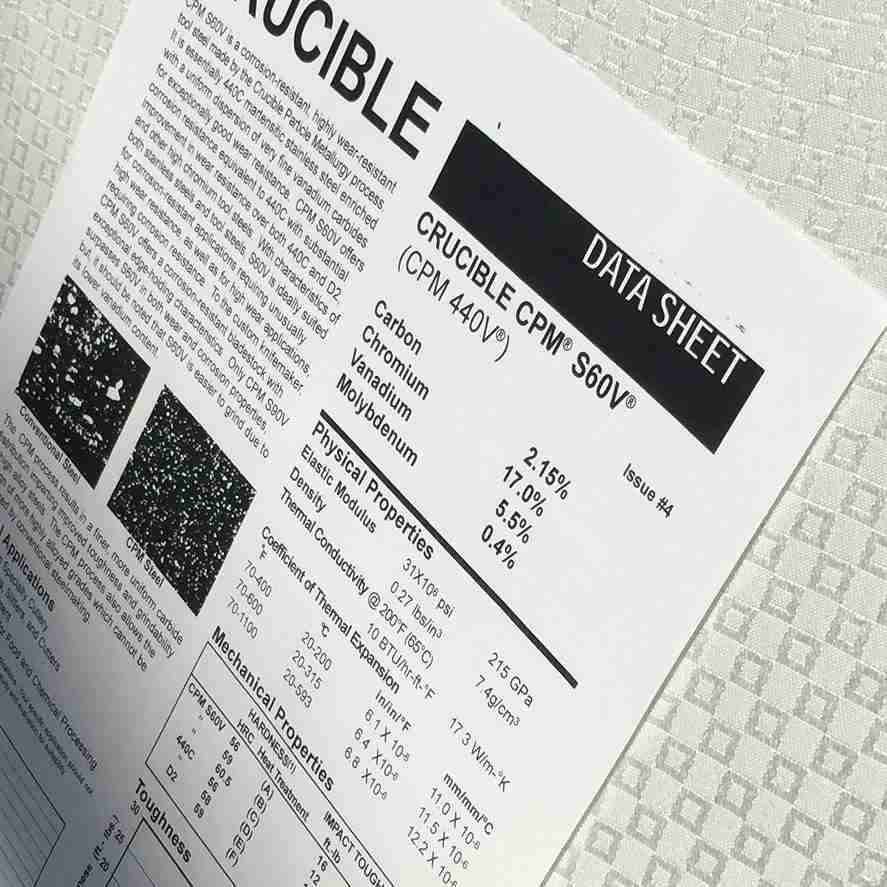 It was developed in 2001 and commercial knives with S30V blades did not come off the shelves until 2010.

CPM steels are becoming more and more present in cutlery and many makers are using this type of steel.

Developed in the United States, this material is commonly used on high-quality pocket knife blades and professional kitchen utensils.

The introduction of vanadium carbides gives extreme hardness to the bonded steel matrix.

Considering the cost, this is one of the best blade steels with an optimal balance between sharp retention, hardness and toughness.

Please note that this steel has an older brother – CPM S35VN, this steel is very similar to the S30V, but due to the niobium content it is easier to work with and more convenient for knife manufacturers.

However, S30V is quite common nowadays and as I told you earlier it has become one of the favorite steels of knife manufacturers.

Other popular types of steel are produced using the same technology:

CPM technology, although it has only become widely known recently, was used in the 1970s.

Composition of the CPM S30V

Vanadium carbides give the grain of the steel structure a more uniform appearance, improving cutting and strength properties.

Despite the difficulty of hardening CPM S30V steel, knives use it because it is easier to grind than other powdered steels.

Probably one of the most famous powdered steels and used on high-end knives.

Corrosion-resistant steel, considered the “golden medium” in the production of knives.

The balance of properties is close to optimal.

CPM S30V is a (hardened) powder(sintered) powder-resistant (sintered) stainless steel that is resistant to wear and corrosion developed by Dick Barber of Crucible Industries in collaboration with knifeman Chris Reeve.

Its chemistry favors the formation and uniform distribution of vanadium carbides, which are harder and more effective at cutting than chromium carbides.

These vanadium carbides give the steel a very refined grain, further improving sharpness and toughness.

Despite some difficulties with consistent heat treatment, knife manufacturers use CPM S30V because its composition makes grinding easier than other powdered steels, although carbides still use the abrasive tapes of the grinder considerably.

Its composition is as follows:

Properties of the CPM S30V 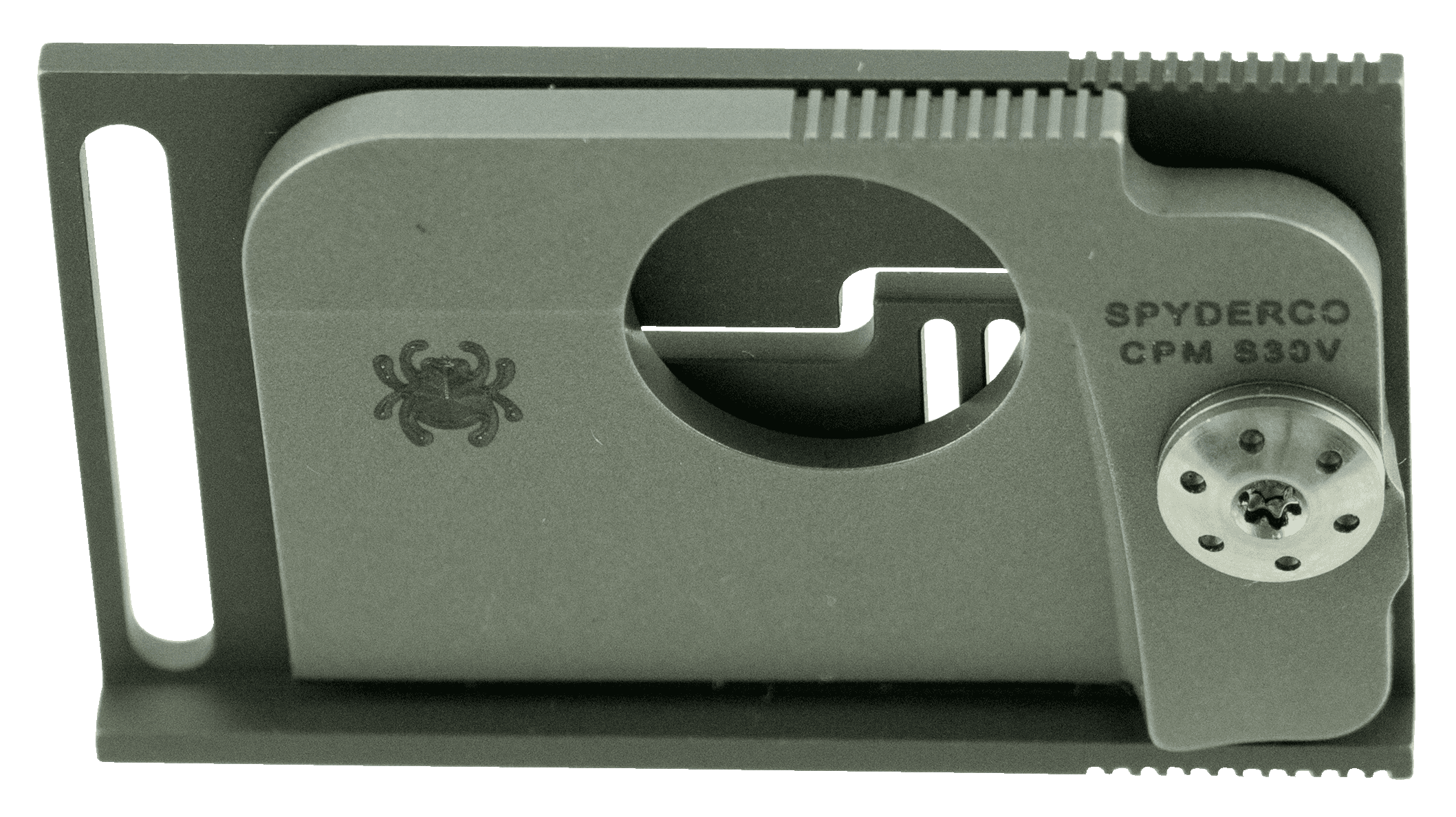 It is so expensive that it is sold per cm and the price of steel greatly affects the price of the knife and is widely used in the production of high-end industrial knives and custom and custom knives.

“the best blade steel available ever.”

Joe Talmadge says it could be the highest-end complete stainless steel par excellence, thanks to the high performance combined with easier workability and aphylaxiability compared to other steels in this class. 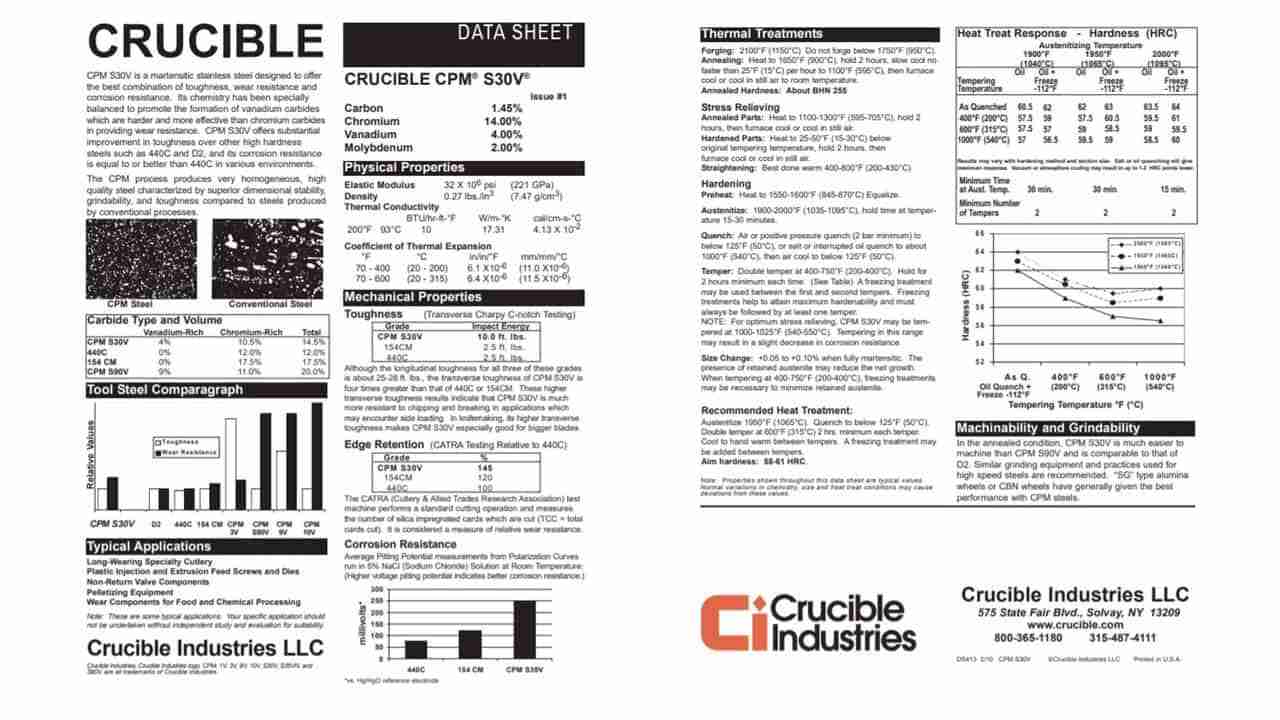 Ps. These are indicative prices that may vary depending on the period

In 2009, Crucible Steel introduced an upgrade to the CPM-S30V to meet the needs of well-known knife manufacturer Chris Reeve who called the CPM-S35VN.

Professional chefs and survivalists living in the open air praise the increased toughness of the S35VN, which greatly reduces the chipping of the micro-bead that tends to afflict the S30V in difficult conditions.

In this type of application, the obvious advantage of fast sharpening an S35VN blade with a sharpening stick or steel stick instead of the need to remove the metal and reform the edge puts S35VN ahead of S30V in some applications.

In common use, it is believed that the edge sealing and stainless properties between S35VN versus S30V are roughly the same. and performance is more often influenced by applied heat treatment, blade design, and edge geometry than differences in metal chemistry.

Alternatives to CPM S30V and S35V

At the same time other companies developed steels with similar characteristics such as the Carpenter CTS-XHP and Uddeholm Elmax which are also widespread and used in cutlery.

These powdered steels use a different process than crucible, but they are also high-end stainless steels (with highchromium and vanadium levels similar to S30V and S35VN)intended to compete with the CPM-S30V and CPM-S35VN.

It is certainly not a steel for those who start both for the cost, for the difficulty of processing and hardening the blade.

A steel for the creation of high-level knives for experienced makers who already know what they do.

Throwing a blade of CPM S30V means throwing a steel that is sold per cm.

To understand us a thickness of 4.2 mm is sold at about 2 euros per cm.

Definitely a steel to use when you know what you’re doing.