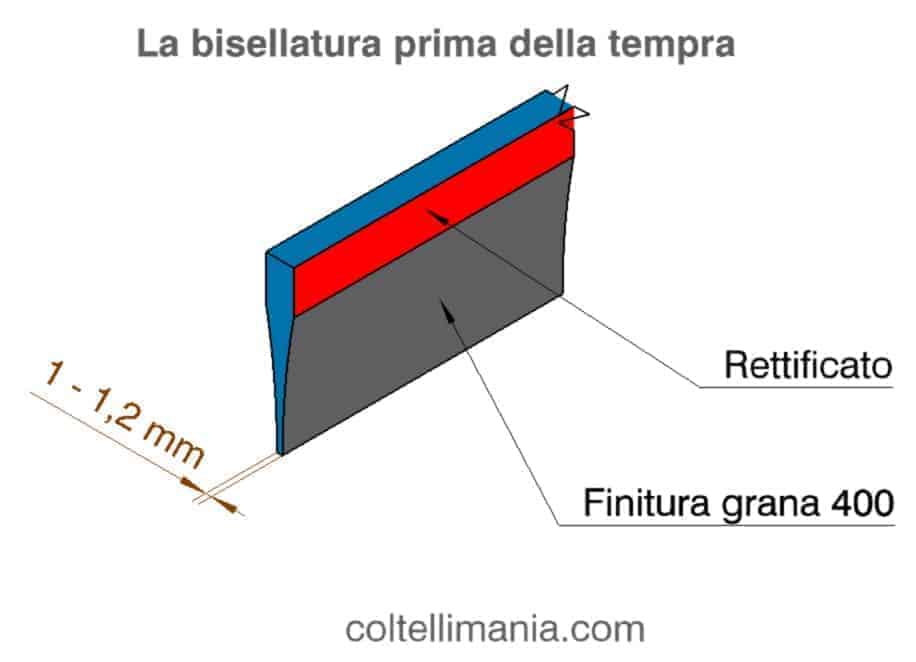 The bevelling of the blade before hardening is a simple but essential question that arises spontaneously:

“Does the bevelling of the blade before hardening have to be finished?”

It is normal that when you start making a knife you find yourself thinking at what level of shape or I like to think of it as an operation you have to bring the knife before hardening.
This type of post I think are useful to respond to important issues that everyone is facing and that I want to share with you for what is my experience and to avoid mistakes or improve your technique.
Let’s now return to the simple but important question of the pill of the day in this post.
Let’s say that the bevelling must be “finished” for that stage of the knife process.
By finite I mean that it is essential that the bevelings when they are on both sides of the blade are symmetrical and not with a finish that goes beyond the grain 400.
Symmetrical bevelling is important to prevent the blade from twisting during hardening and extinguishing operation, especially in oil .
This is also the reason especially in the Japanese kitchen knives or in knives in general that have only one bevelled side that often many makers perform the hardening without performing the bevelling but doing it later taking great care to cool the blade often or even creating real water cooling systems and using water-resistant abrasive belts .
This method of hardening before bevelling clearly is best suited on blades with thicknesses that do not exceed 3 mm unless you want to consume the abrasive tapes that have a cost.
The key thing is to leave 1 – 1.2 mm of coast line on the wire of the blade before the temper.

Check with the caliber or with time even to the eye is fine.
If the wire is too thin what happens during the temperise is that the wire melts before the rest of the blade is in tempering temperature.
Do not go with the finish of the blade over the 400 grain as tape and very importantly the plate of the blade must be a plan, so already rectified.
Now that you’re in this condition of wire and finishing it tempts it or bring it to harden.
Ps. Before hardening bring the finish of the blade to 800 grain or more is not needed.
When you leave with the hardened knife never start from the same grain with which I previously “finished” the knife for the temper.
If I’m done with the 400 you usually start from the 220 and then go up to complete the bisellation before creating the wire (micro bevel).
Now let us pay attention to another aspect.
When you work on thin, hardened thicknesses that can heat up to the point of compromising the temper, you need to have some precautions such as:

Another thing I advise you to do is not to finish the beveling radius or get to where you want the ricasso to end but to leave 3-5 millimeters to give you the opportunity to recover some error to get the symmetry and shape of the beam.

Also with regard to the finishing of the blade before hardening do not go beyond the grain 400 but it is important that the contouring is finished, there must be finished already all the holes otherwise drilling on the hardened blade is more complicated and when it is present it is also done the tapering of the blade.

Good luck with your work!