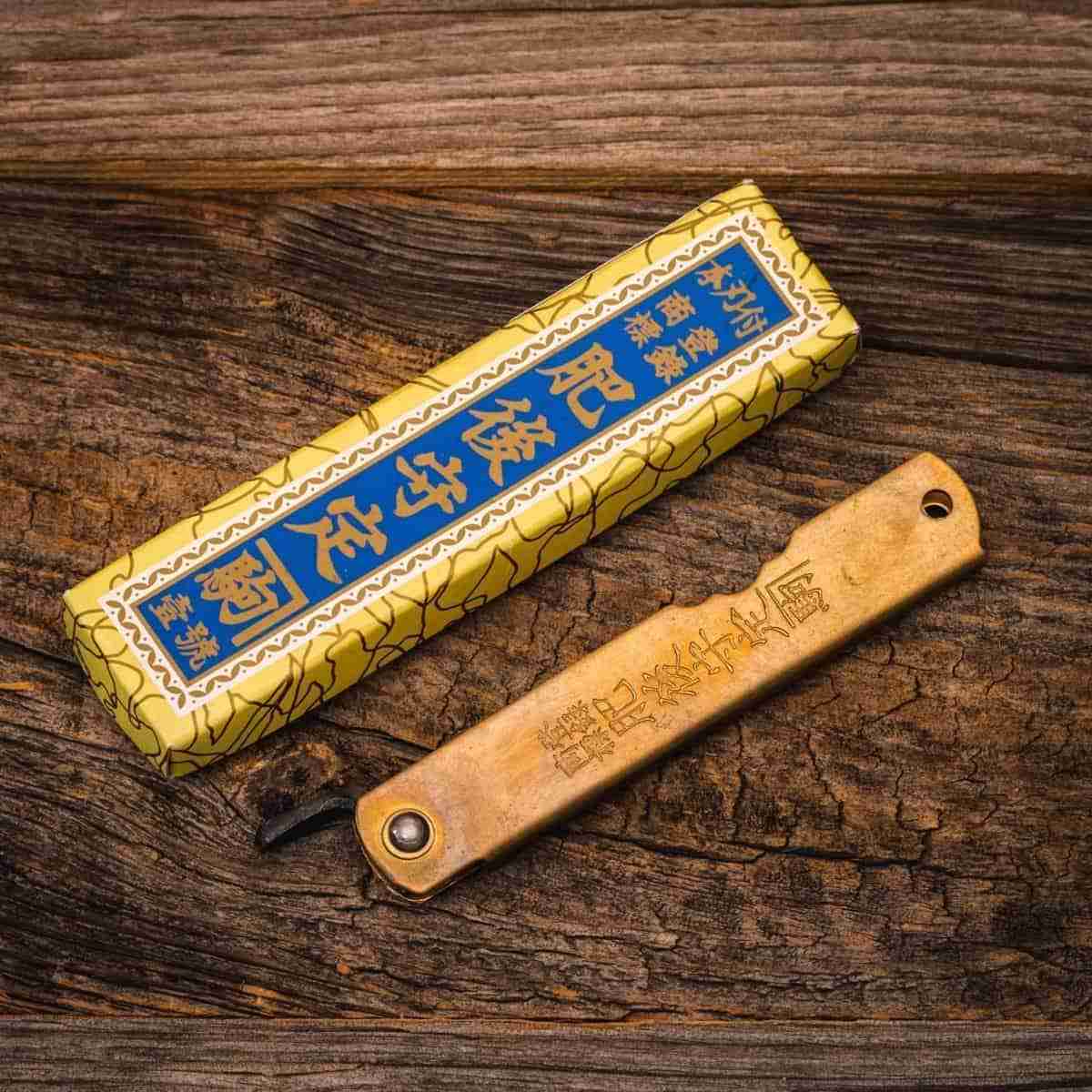 In the world of knives, there is a knife that is going through the times with an ancient history and present in all Japanese families.

His name is Higonokami.

If we wanted to make a comparison it could be in Europe and in Italy the Opinel pocket knife or the Swiss army knife with the difference that it is defined as one of the simplest and cheapest knives to make.This Japanese folding knife is one of the oldest knife brands still in production, it is almost unchanged since its creation and is also one of the cheapest on the market. 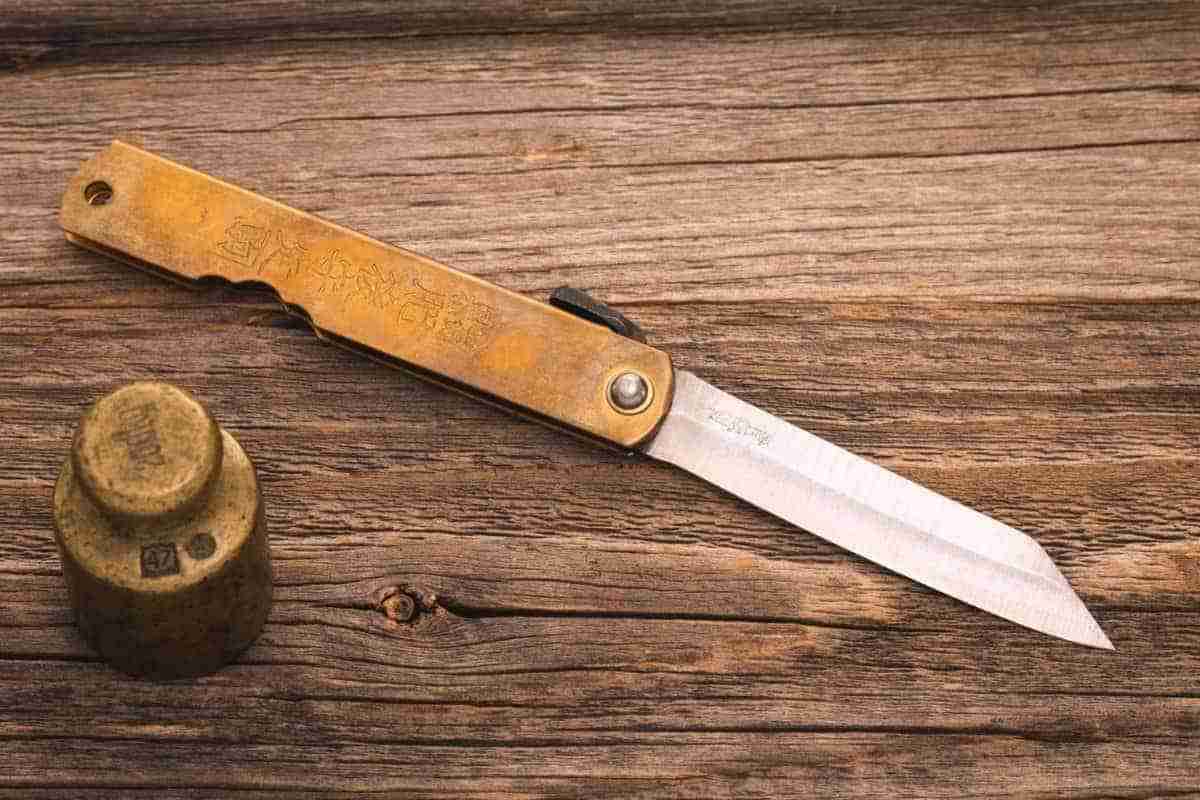 The Higonokami knife was born in 1896 in the Meiji era in Japan, when a man named Tasaburo Shigematsu brought back a knife from Kyushu province and asked a knifeman named Teji Murakami from the Miki area to manufacture it. 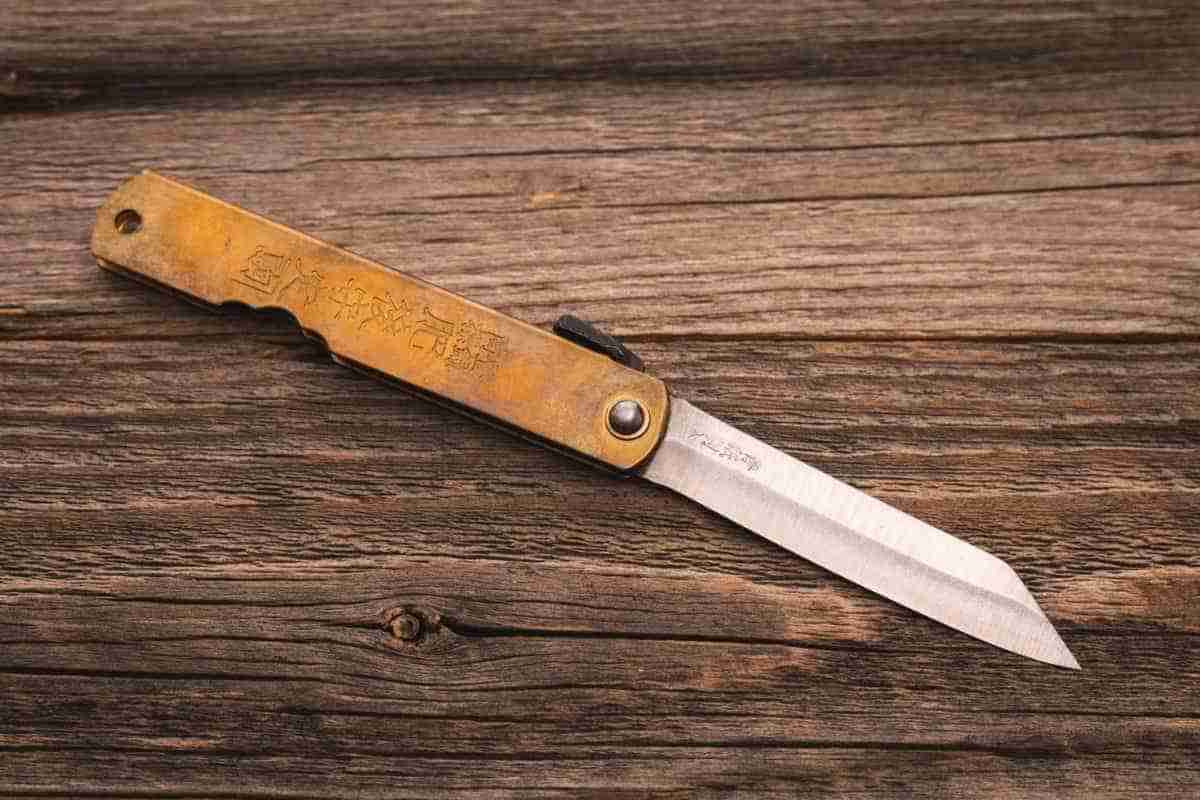 This original knife had a flaw, as it had no device to open the blade.

The story goes that it was Murakami who first came up with the idea of adding a lever to the blade, thus giving the knife the look it still looks like today and ensuring its commercial success.

Some sources speak of a second blacksmith who was influential in this birth, Shigeji Nagao and his surname we will find him again later in the post. 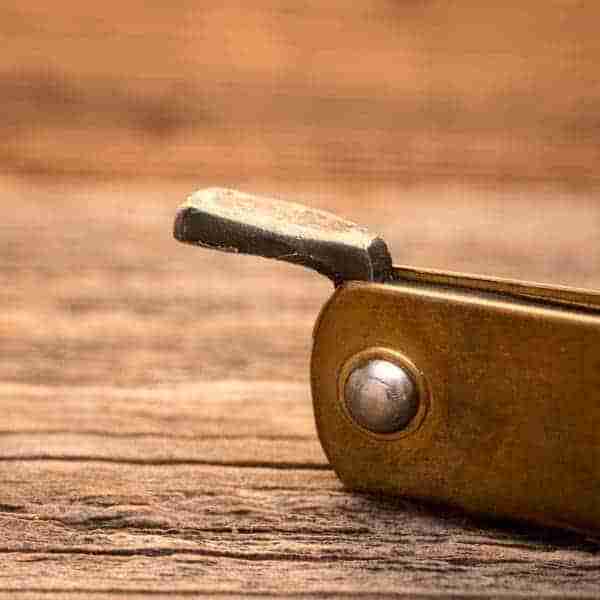 The history of the Japanese pocket knife Higonokami

The history of Higonokami is intertwined with Japan’s troubled history over the past two centuries.

In the mid-19th century, threatened by the cannons of Commodore Perry’s US Navy, the Empire of the Rising Sun was forced to open its borders to the rest of the world.

Japan suddenly goes through a huge change, having to evolve from a feudal society into a modern industrial state so as not to risk being colonized.

In 1877, the last battle against a group of rebel samurai against the emperor’s modern army (as in the film, “The Last Samurai”) occurred.

After being defeated, the samurai were gradually stripped of their privileges and lost the right to take their swords to public places.

In fact, a lot of blacksmiths losing their main clients, they had to find other incomes and started making knives.

Many of them settled around Miki, a region with a lot of iron ore sand and also the historic birthplace of Higonokami.

The name of the knife is strongly linked to these events.

“Higo no Kami” in Japanese means “Lord of Higo.”

Higo is the old name of Kyushu province, from where the original knife came from, but “Higo no Kami” is also a noble title historically given to powerful samurai.

In those days, Matsudaira Katamori was the lord of Higo and was also the last involved in both Perry’s events and the last samurai battles. 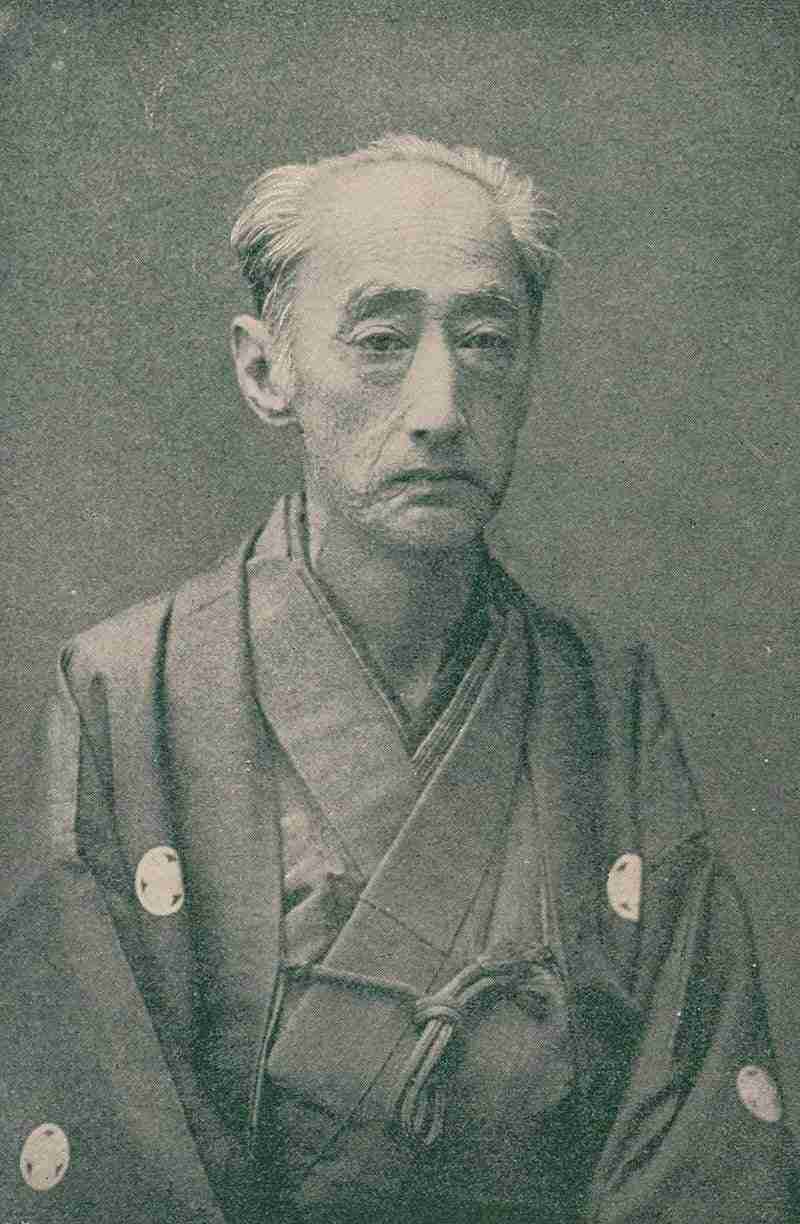 The Last Real Higo No Kami

In 1899 a guild of knife manufacturers was created in Miki.

In 1907 the name “Higonokami” became a trademark.

Only members of society will be able to produce the knife.

The Higonakami became the most popular Japanese knife, the one that all children had in their school bags, the everyday utilitarian knife.

They also organized mass competitions for sharpening pencils, with prizes for the fastest.

Despite its simple and basic design, the knife has some exceptional qualities, such as the high-quality carbon steel blade, forged in the “sanmai” style, easy to sharpen and inexpensive.

The knife survived the lack of raw materials during World War II and the subsequent American occupation.

The Americans outlawed the making of swords and again a lot of blacksmiths had to look for another job. 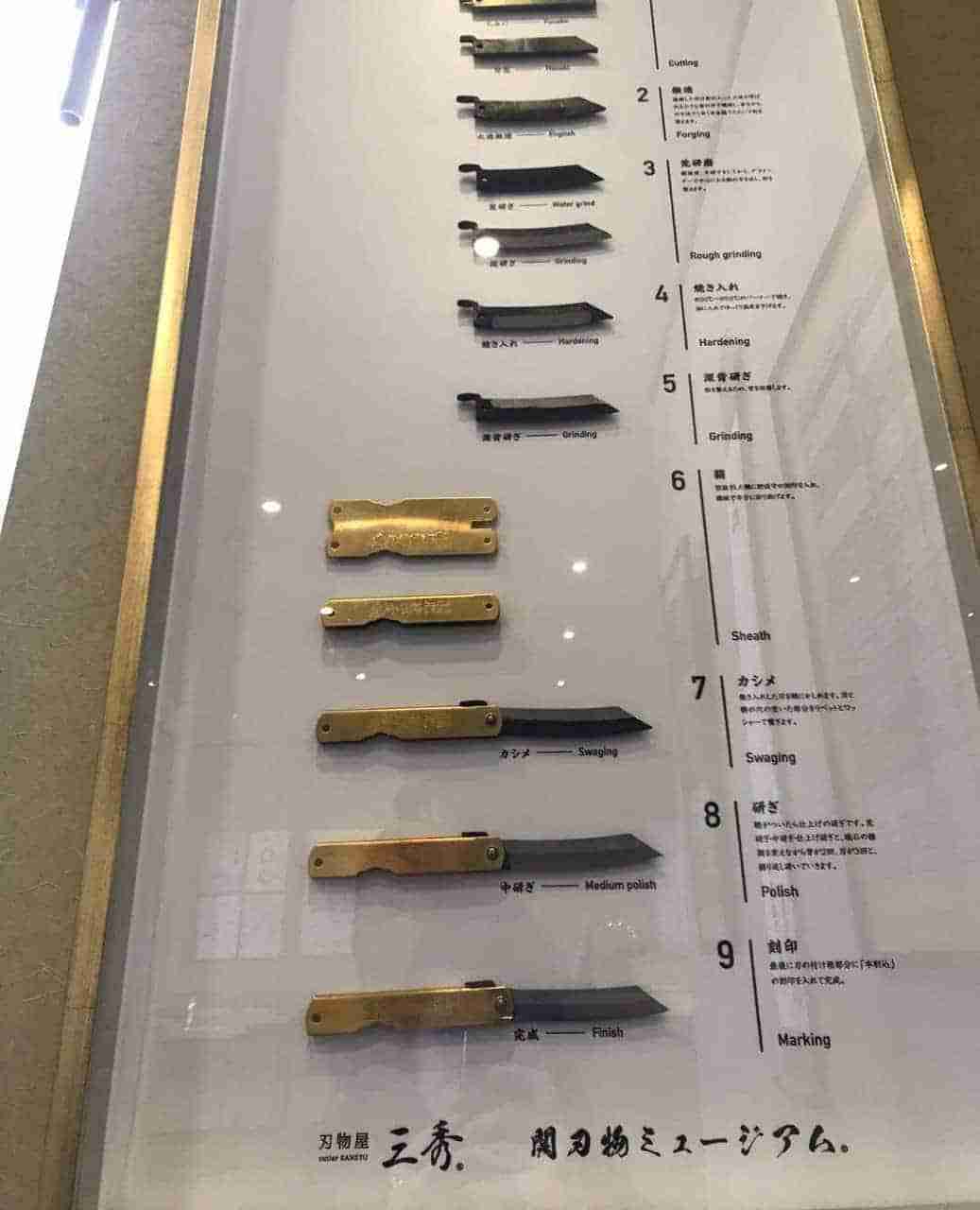 The Murder with the Higonokami Knife

The coup de grace to the success story of the Higonokami happened in 1961, when a mentally disturbed 17-year-old boy killed the leader of the Socialist Party by striking him in public with the same kind of sword that had been forbidden a century earlier in 1876 …

An unprecedented and hysterical anti-knife campaign swept across the country, banning the Bringing of the Higonokami knife to school and restricting its port.

This was a blow, the Higonokami almost disappeared and if it survives today it is thanks to some knife enthusiasts and nostalgics of their childhood, who kept the flame alive.

Today the Higonokami knife has lost its popularity, and a lot of young Japanese do not even know about its existence.

So if “Higonokami” is a brand that only the manufacturers belonging to the company in Miki can use, what are the various models on the market?

In fact, unfortunately, only one guild producer remained, all the others stopped producing. The only “true” and “historical” Higonokami is easy to spot.

It’s what’s sold in the little blue and gold boxes. 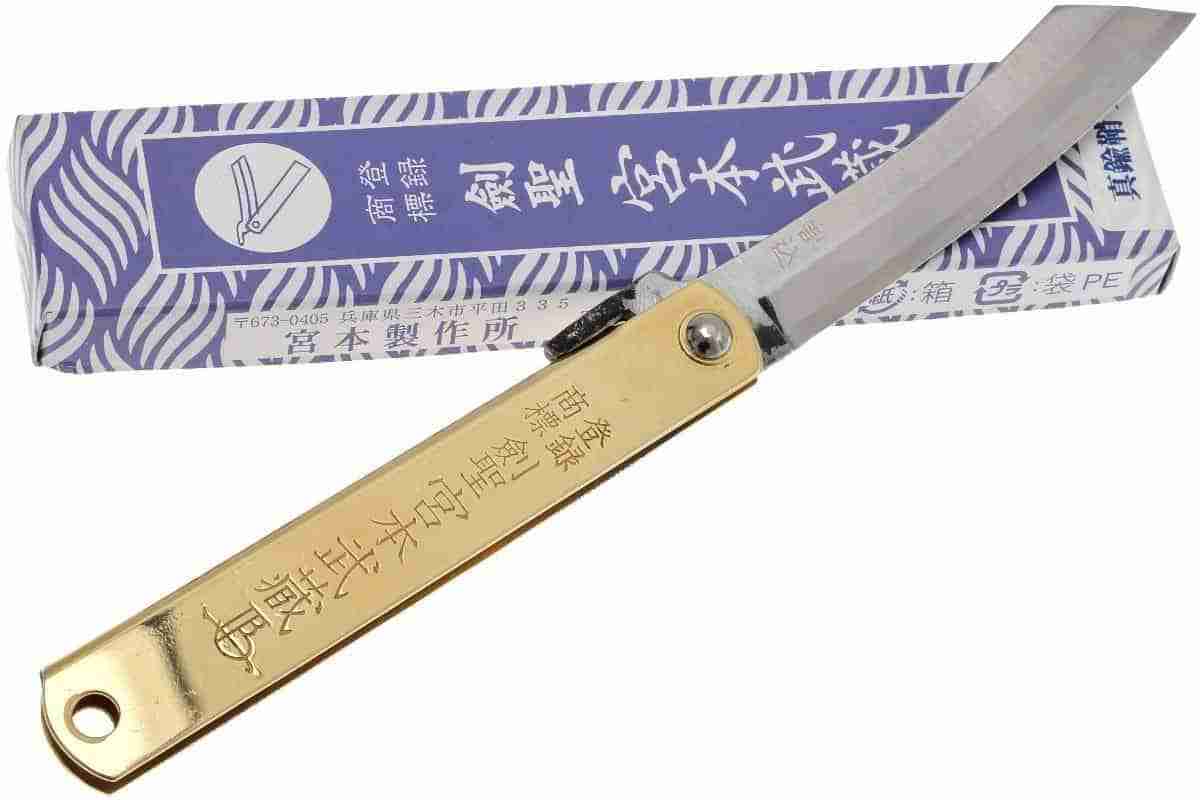 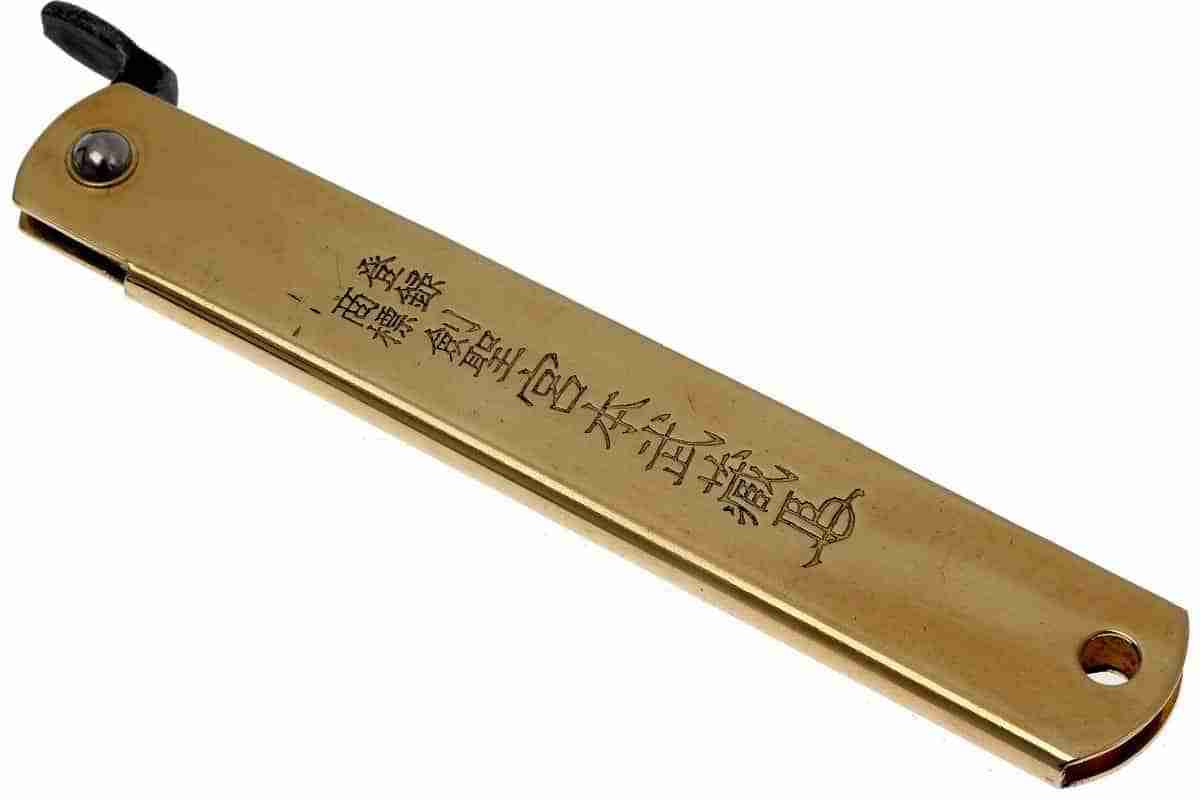 They are made by The Nagao’s company, founded in Miki, descended from four generations of blacksmiths, of which an ancestor was that Nagao mentioned at the beginning of the story.

Today, Motosuke Nagao is quite old, his succession is not assured, and the brand may disappear with him. Its basic and best-known model is called “Sada Koma” and exists in three forms: small, medium and large.

It is the archetype of the higonokami knife:

There are several forms of blades but the most common is the one with the tip in line with the edge, theso-called” much inverted ” (see photo).

There are also other versions with different steels.

Some of them are even cheaper with a Shirogami blade and a blackened steel handle.

There are also some special editions with a Sanmai damask blade.

What about the others?

The ones sold in blue and white boxes with a samurai on the handle? 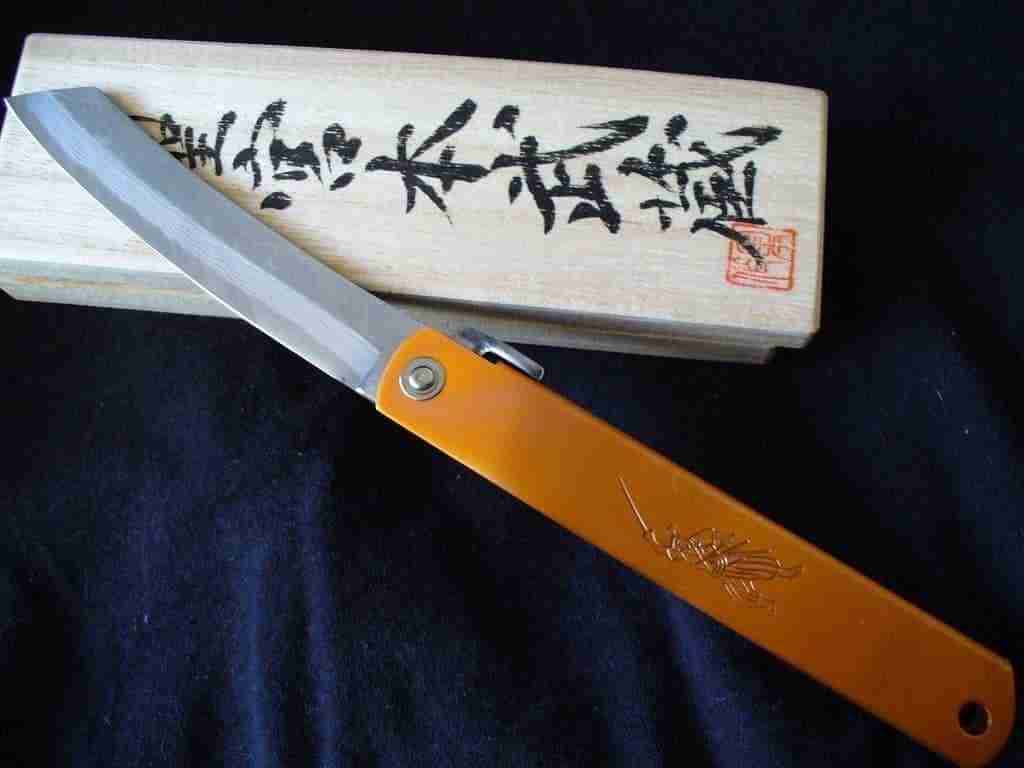 Officially they are not and cannot use the name ‘Higonokami’ as their creator Miyamoto SEISAKUSHO (who has been making them since 1932), left the company in the 1960s.

They call it Higonaifu,which is the Japanese pronunciation of “Higo knife.” 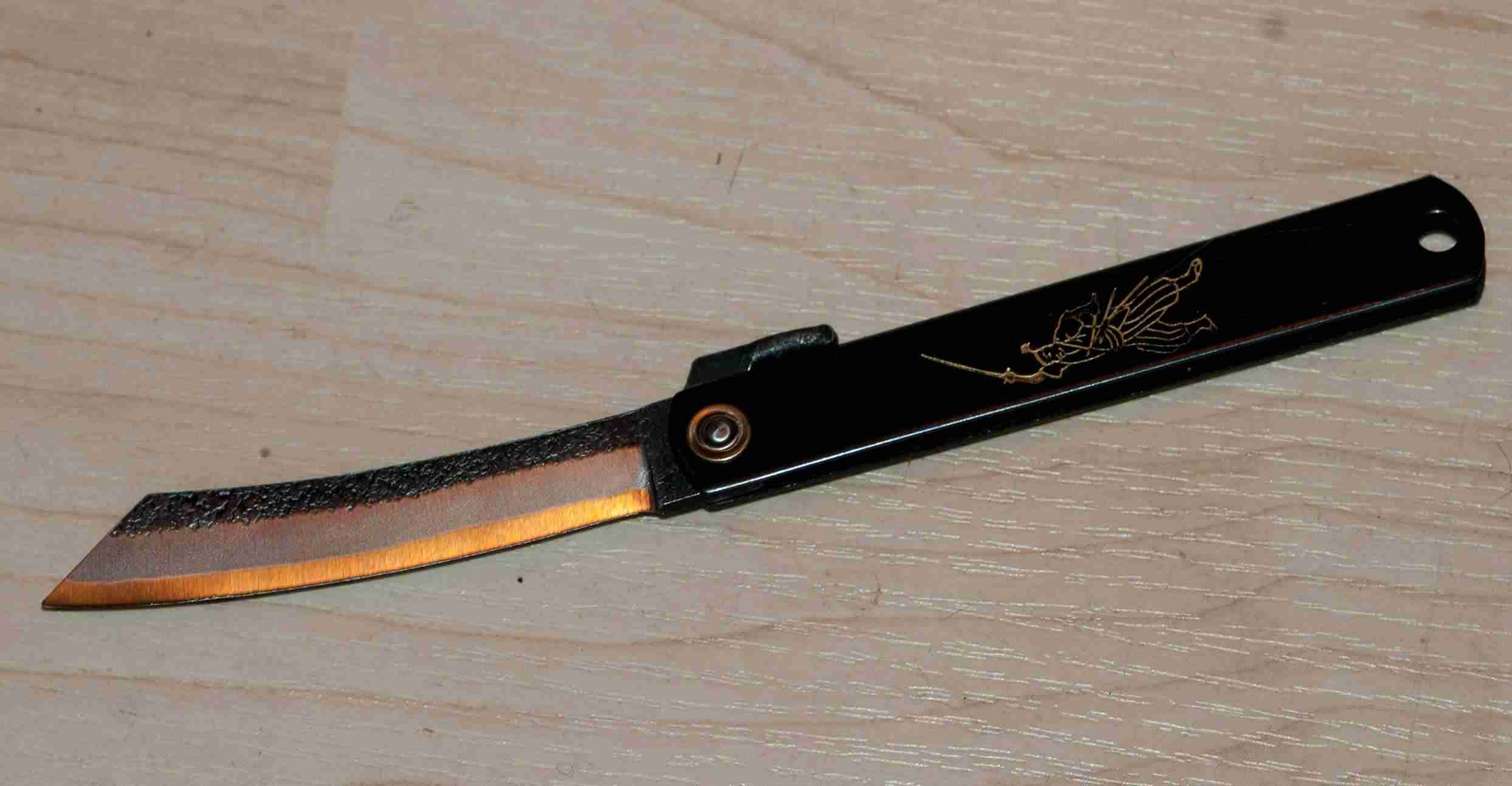 Technically they are very similar to the original ones and have the same size, the same steel as the blades and the same material as the handles.

The best known is the one with a black painted steel handle and a raw forged blade, but you can also find models with chrome steel or the more traditional brass handles.

Sophisticated versions of it also exist with a copper handle and a damascus blade forged by Ikeuchi. 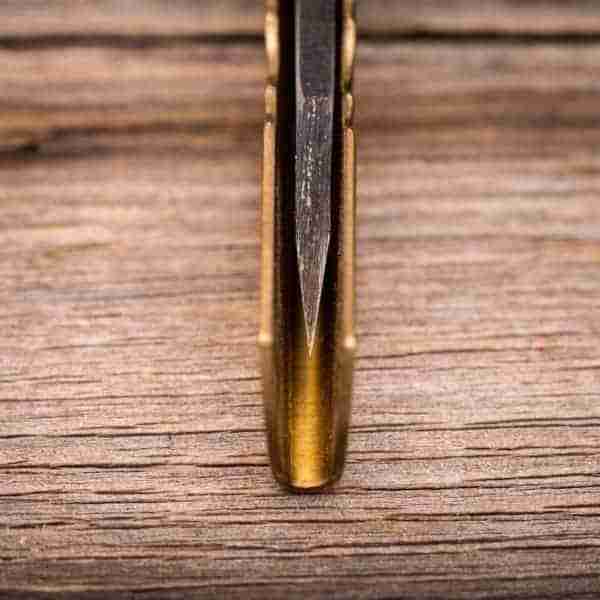 The warrior with the sword drawn on the handle is Miyamoto Musashi.

A legendary ronin samurai who has never lost a duel and invented a technique to fight with two swords.

Miyamoto Musashi at the end of his life retired to Higo province and wrote several martial arts treatises such as “the book of the five rings” which is still read and studied today.