The knives of Frosolone, the Italian Toledo 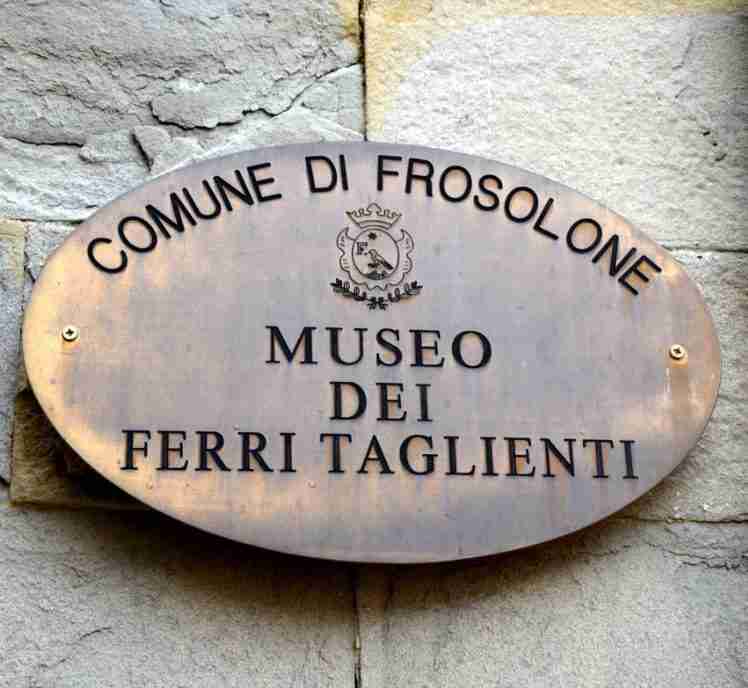 The knives of Frosolone, the Italian Toledo

A market exhibition and a museum to celebrate an ancient tradition still alive and renowned today, to discover the knives, scissors and scalpels of the beautiful Apennine village that competed even with those of Toledo

Italy is a country full of villages and each has its own characteristics and somehow leaves a trace of the life that was conducted in the past and often celebrates a statue to the characters who lived in those places.

No wonder, therefore, if those who arrive in Frosolone come across the statue of a craftsman engaged, standing, working on an anvil: the “monument to the knife maker”..

Yes, because this is a bit like the “Toledo Italian”, a country where Iron and steel have always been worked, handing down from father to son the secrets of the art of “cutting irons”, and where forging has reached peaks of perfection such that it does not seem risky to compare the blades of the place to those that have given fame to the Spanish city. 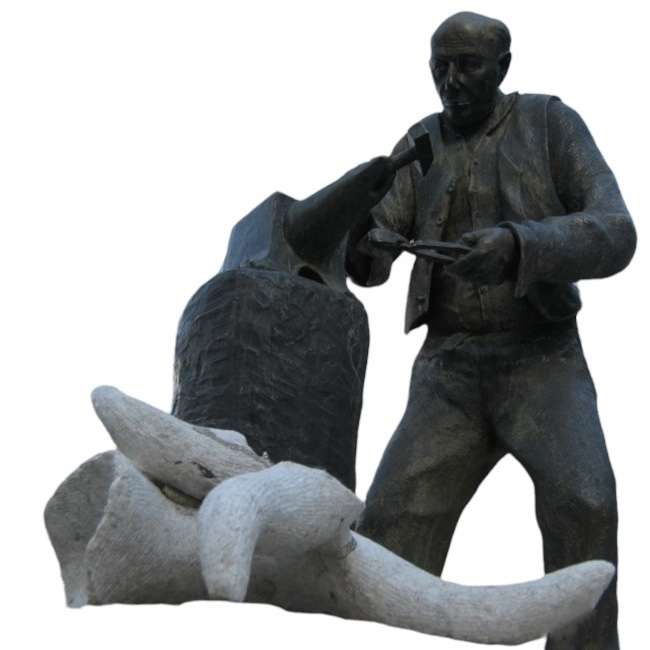 After all, perhaps thanks to Venetian artisans who introduced the art of forging steel, the Contado del Molise already in the fifteenth century was One of the largest weapons production centers in Central and Southern Italy (it is said that the leader Cola di Monforte, the Count of Campobasso who put his war skills at the service of several European courts, for his mercenaries always demanded swords and daggers forged in his homeland).

However, it was at the beginning of the 800 that, with the manufacture of blades for domestic use and no longer war, that in Frosolone this activity imposed itself as predominant in the country, especially after that in 1828 the brothers Giustino and Luigi Fazioli they won the silver medal at the Artisan Exhibition of Naples, giving the Frosolonese industry fame throughout the Kingdom of the Two Sicilies and elsewhere.

The tradition of the knives of Frosolone, the Italian Toledo

There are those who date back to the sixth century the origins of the tradition of forging blades in Frosolone.

In fact, it is not easy to place temporally the dawn of the spread of this art among the artisans of the country who, over the centuries, have transmitted from father to son An ancient knowledge which he has led to the present day knives, scissors, scalpels and sharp blades of all shapes and sizes, all of extremely fine workmanship.

Documentary evidence shows that in medieval times Venetian blacksmiths settled in the south and gave rise to a long tradition of forging in Molise.

In Frosolone, over the centuries, the activity experienced increasing fortune to the point that in the nineteenth century the blades of this village set in the Apennines came to compete with even the much more famous ones of Toledo.

The activity of forging gave work to many apprentices and craftsmen who contributed to perpetuate the now rooted local tradition.

Today in the beautiful town of the province of Isernia the art of transforming metal into a unique and precious artifact It has lost, in part, the artisan connotation in favor of industrial production, but in the families of forgers it is still alive The spirit of yesteryear which is lavished in the management and organization of the activity.

In the streets of the center, moreover, there are shops and specialized shops where you can admire and buy blades of all kinds.

Handmade and “tailor-made” there are different types, ranging from the traditional “hunchback of Frosolone” to the “Zuava” with the carved handle, from snap knives to spring knives, from mozzetto to temperino.

Without forgetting the household utensils and work tools such as tailor’s and barber’s scissors , manicures and pruning, considered of high quality.

The typical artifacts of the Frosolone tradition can not only be called “knives” but authentic unique and exclusive pieces. 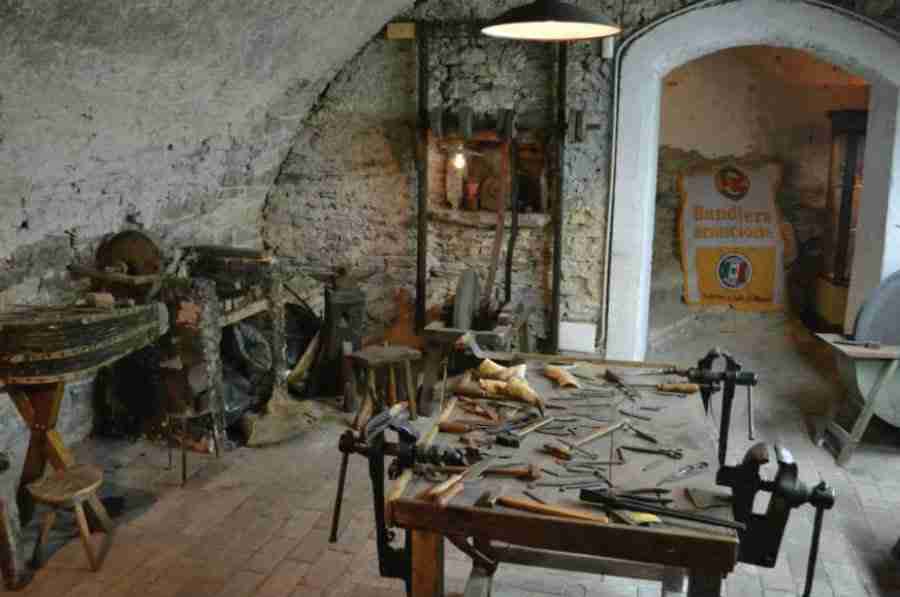 So Frosolone has imposed itself as The “capital” of Molise cutlery, a manufacturing activity that during the nineteenth century came to employ hundreds of inhabitants of the country and that still in the mid-twentieth century saw the presence of 80 craft shops, specialized in particular in the production of small or medium-sized scissors and switchblade knives.

Here were produced and still produce the instruments that every year, in August, become the protagonists of the National Market Exhibition of Scissors and Knives, an event that conveys in the village swarms of visitors and sellers, with the streets of the historic center invaded by Workbenches, craft shops, outdoor demonstrations, as well as the Forging Festival, which revives in front of everyone methods of craftsmanship that belong to the past but that retain their charm intact. 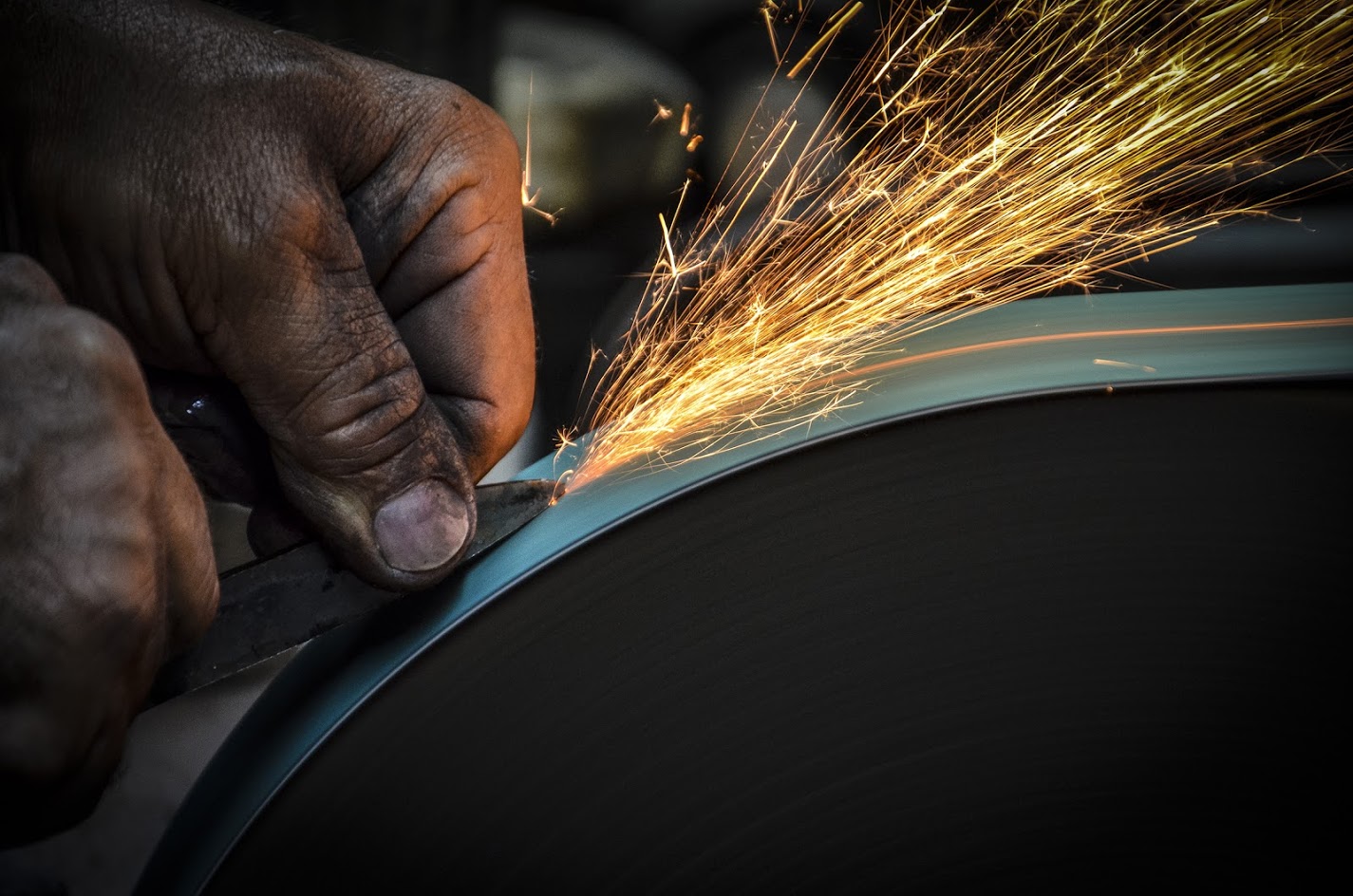 Visiting Frosolone in August is the best time

A visit to Frosolone cannot, therefore, ignore an interesting study dedicated to the renowned local blades.

The best way to learn more and buy valuable pieces is to take part in the two most significant events dedicated to the tradition of forging.

The events both take place in August:

Do not miss a visit to the Museum of Cutting Irons which, thanks to funding from the Ministry of University and University Research, has been able to set up an interesting exhibition of hundreds of objects recovered among collectors and descendants of the families of knife and scissors workers of the last century.

All year round you can visit in via Mazzini the “Museum of Cutting Irons”, opened in 1997 (and renovated in 2005) to pass on the technique of forging and craftsmanship of scissors and knives.

There are about 400 objects of historical value, coming from private collections or recovered from the great-grandchildren of those who worked scissors and knives in the area a hundred and more years ago, as well as a series of military cutting blades procured by the superintendents of the artistic heritage of the Marche and Lazio.

In the museum, in addition to the bulletin boards where the objects are exhibited, there are also two workshops, one with period instruments that show the steel processing systems of the late nineteenth century, the other with modern machinery, which illustrate the techniques of mass production. 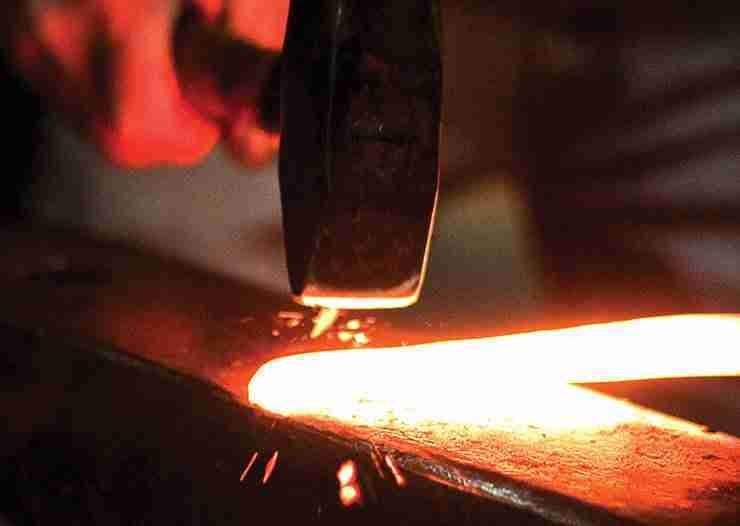 In the country it is still very much alive today, thanks to several cutlery shops that carry on the ancient family business, with methods and processes cautiously adapted to our times, continuing to produce every possible type of cutting tool, traditional and modern, from scalpels to razors, from butcher knives to those for divers, from tailor’s scissors to barber’s scissors, and so on.

Thus, while in Campobasso the glorious craftsmanship of perforated steel seems to have started a crisis with no return, Frosolone remains a swarm of family-run workshops, where you forge, roll up and lima keeping alive an art of “cutting tools” that remains all in all flourishing, perhaps thanks to the fact that in the village, despite the considerable size reached by some local cutlery, a real industrialization has never been seen. 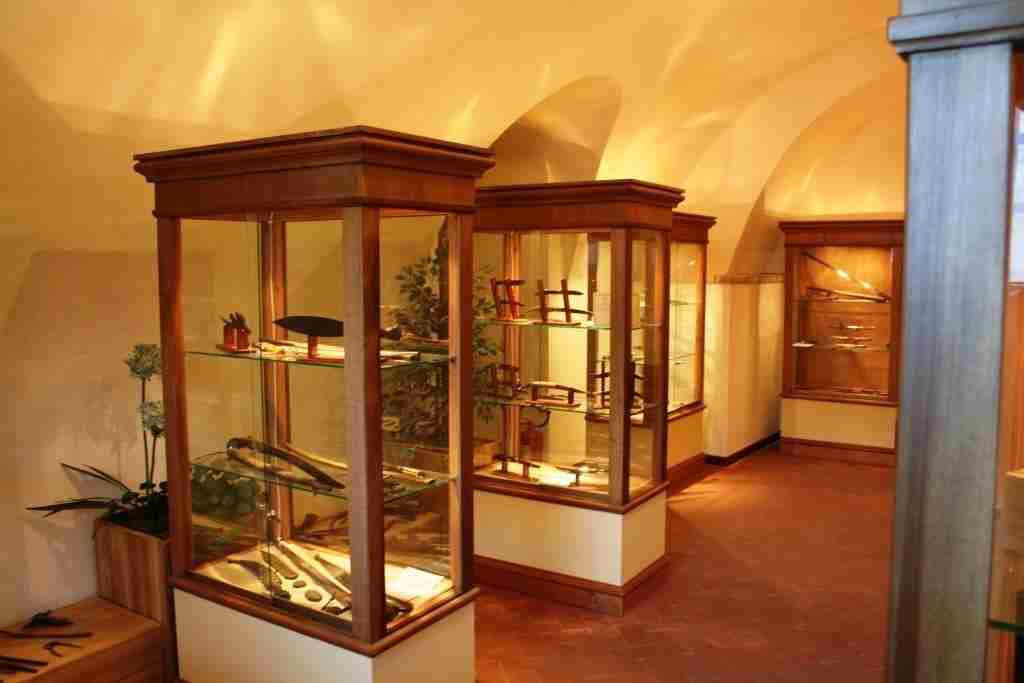 How to get there and what to see

Lying near the sources of the Torrente Durone, Frosolone is a mountain village in the province of Isernia that, thanks to its atmosphere of other times and the beauty of the natural setting that surrounds it, has deserved numerous awards, including the inclusion in the list of the most beautiful villages in Italy and the assignment of the Orange Flag Touring Club.

But there is another aspect of local history and culture that makes this place so unique and fascinating and it is the activity of forging blades that boasts a centuries-old tradition long handed down from generation to generation.

For those who want to visit the Museum of Cutting Irons is the address is in via Selva in Frosolone.

On the same street, at n.4, the factories of the Coltellerie Michele Fraraccio carry on the family tradition dating back to 1875 producing over 3,000 different references.

It is also worth taking a look at the creations of The Paolucci Cutlery, in via Teste n. 3, a company founded in 1972 by Felice, Liberato and Saverio who have given continuity to the ancient family business handed down from generation to generation. 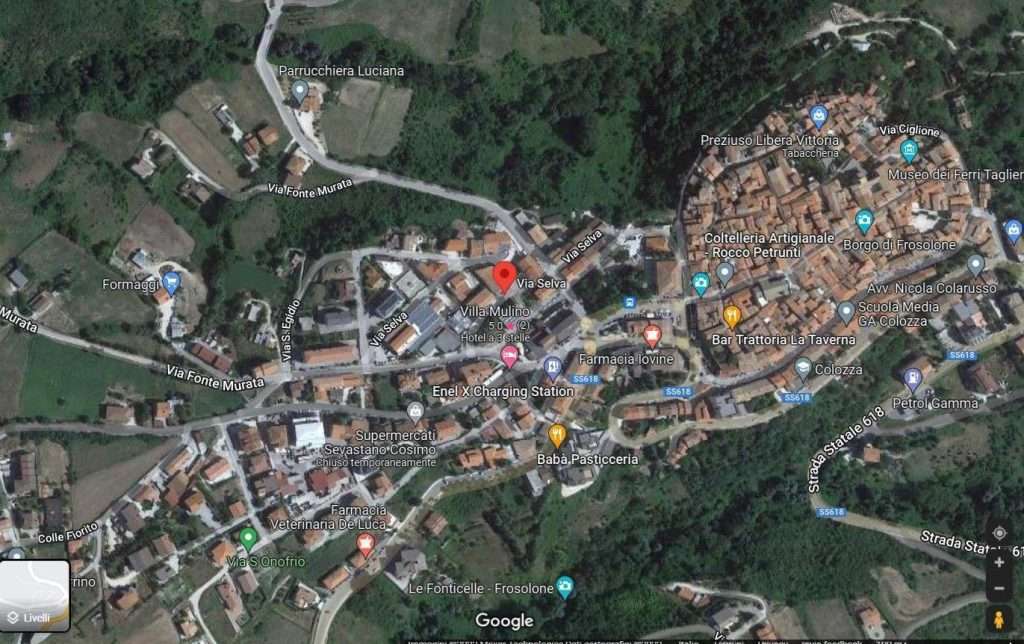 If you happen to pass by Frosolone and you are a knife enthusiast you can not go to visit the exhibition and the village with its historic cutlery.