Trademark Round Hole and why the round hole on the knives?

This is one of the most common questions that some people who do not know knife folders but in some cases the hole is also present on fixed knives although for different reasons.

In this case I’m not telling you about the paracord holes made in the handle or blade or the karambit holes or the pinky knife but the holes made on the blades of the knife folders.

On the knives folder is made as a means of retention to open the blade and the Spyderco is in the case of folders “why the round hole?” because it is the company that introduced this simple but very effective function to perform this function.

The round hole allows you to quickly and easily open the blade of a folding knife with one hand.

This revolutionary feature was granted a utility patent in the United States in 1981 and literally helped define the shape of the modern folding knife.

Unlike thumb protruding perks, discs, and other bindings that open with one hand, the hole offers a larger surface area for greater reliability and does not interfere with theblade cutting action.

It is an iconic symbol of the Spyderco brand, The Trademark Round Hole ™ also serves as a user-friendly alternative to the traditional (nailed) nail polish in the blades to perform the opening with two hands and is now a symbol and identity of the Spyderco brand now used both in folders but also in the brand’s fixed blade knives. 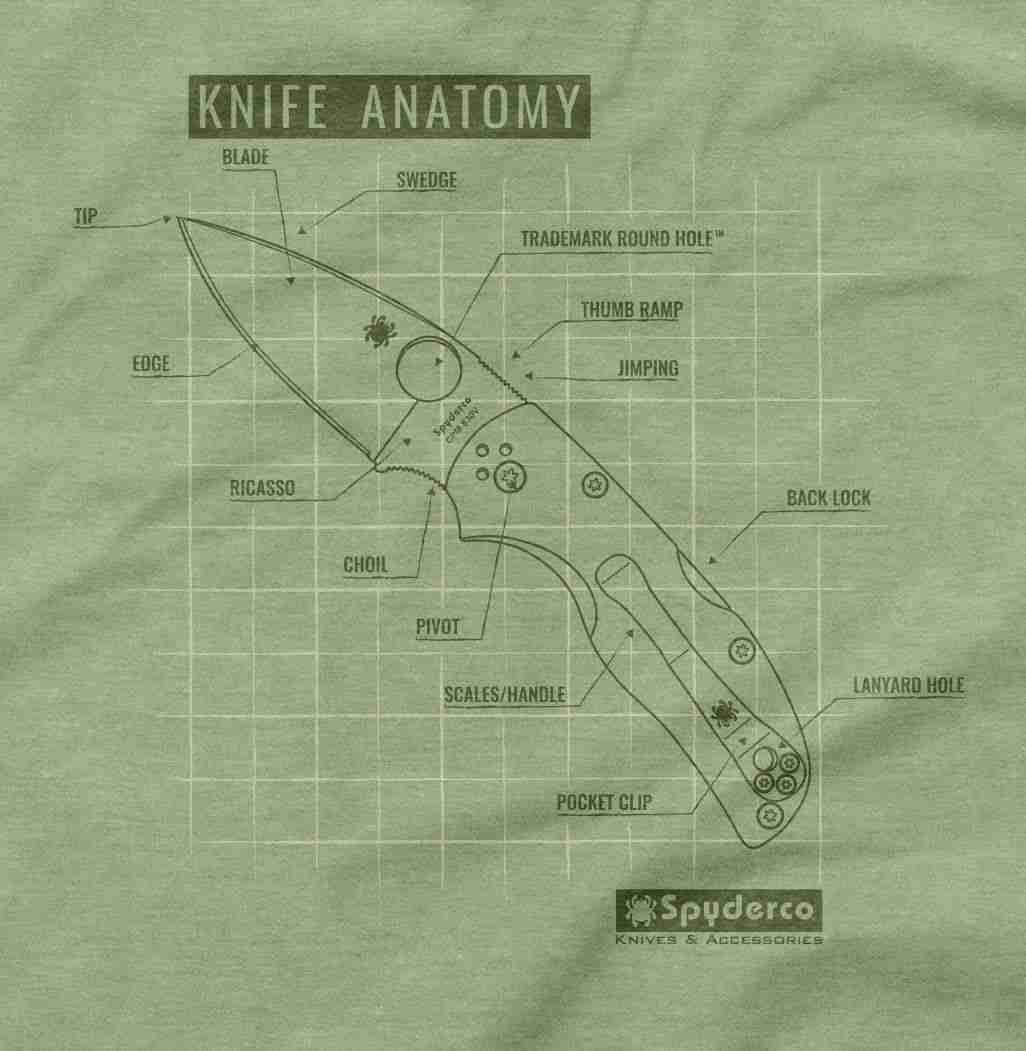 The Spyderco hole is registered.

You got it right and it’s also the reason why they use it on all their knives, including fixed blades.

It was patented in 1981 and at that time I’m sure it was a big deal because the one-hand opening knives were completely unknown, apart from snap blades and gravity knives.

Nowadays with all the different techniques of opening a one-hand knife is no longer a big deal, so today it might seem like something trivial now what was once patented.

Another simple invention: leverage.” It’s just a “stupid” stick!” or the chair but the problem is not simplicity but the concept that “there are leaders and there are followers”.”

By copying you will never be able to overcome a company that innovates.

That’s why people have trouble catching up with companies like Spyderco or Apple in telephony, because while they’re creating new products others try to imitate the things they did years ago.

As for brand identity, it’s a completely different topic.

It’s why fixed blades have holes (not because it’s a great place to tie a lanyard).

If other brands use the hole it is actually something very confusing and frustrating because they did not understand that in some cases it is a marketing of Spyderco, a brand and that it is not made for passing a paracord (you can also do it but that is not the point), in the end they are mis copying not understanding its meaning and diminishing its history and brand. 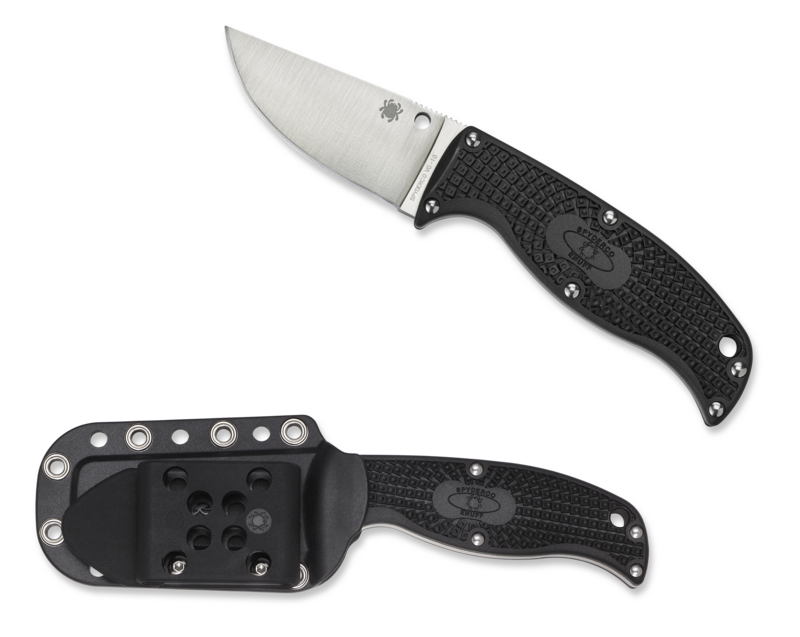 Currently, the round hole is still officially and legally registered.

In the end I think that the controversy over knives of other brands such as Benchmade or Sog, etc. is related to the similarities of the shapes more than to the presence of the hole for opening to one hand.

A drilled hole is simply one of those types of inventions that you can’t hold on to on your own as a company just like nail print, thumbstud, liner lock, flat-beaded blade, etc.

The design of the knife is what can really give rise to controversy by blatantly copying a knife from a manufacturer or maker.

Benchmade and Spyderco’s official statement is that there is an agreement between the two parties.

Spyderco’s eye-catching design and very high quality is what makes them probably among the best knives on the market and the spydie hole that distinguishes knives will continue to be copied but in my opinion it’s fine if you understand its meaning. 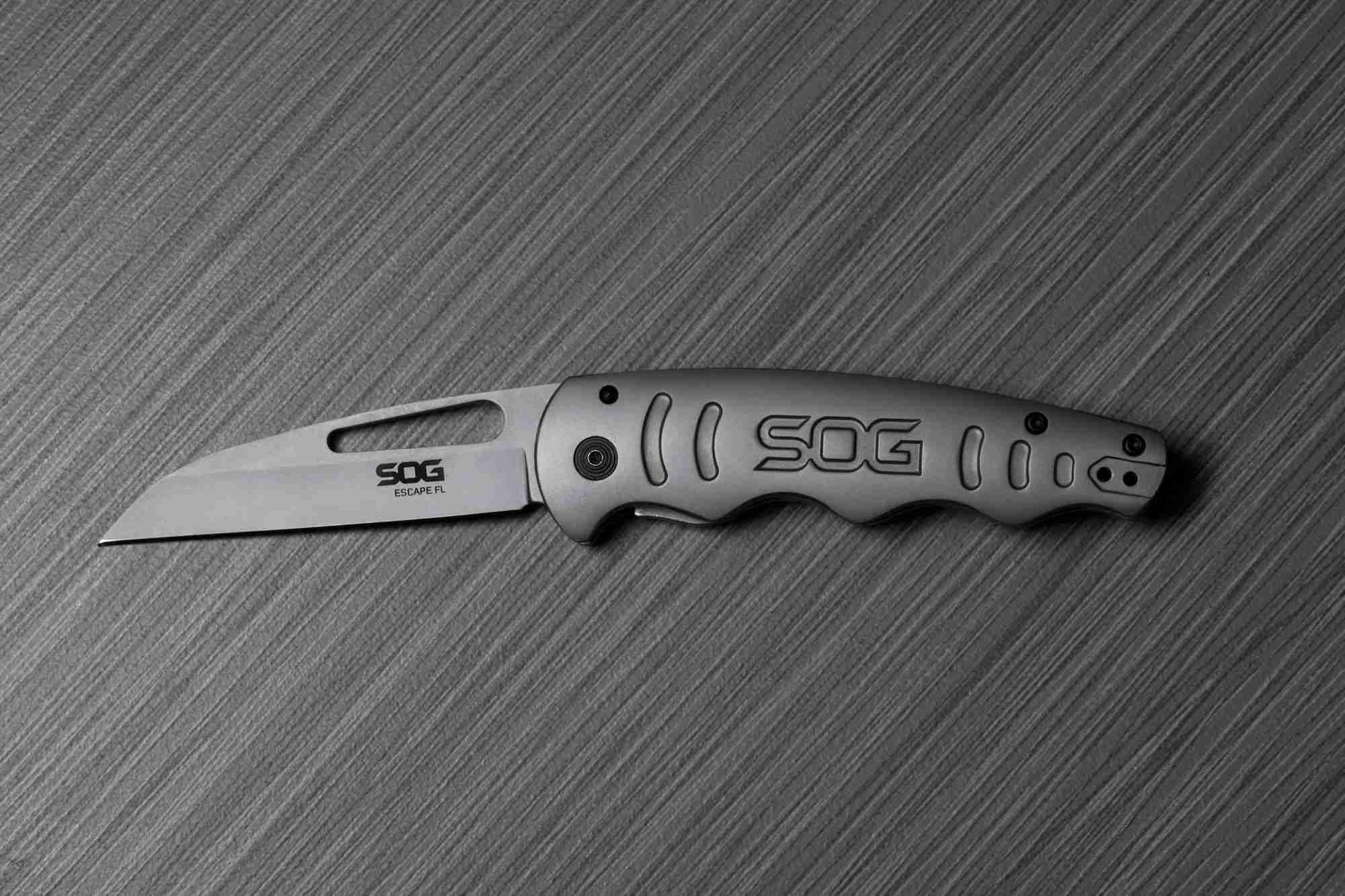 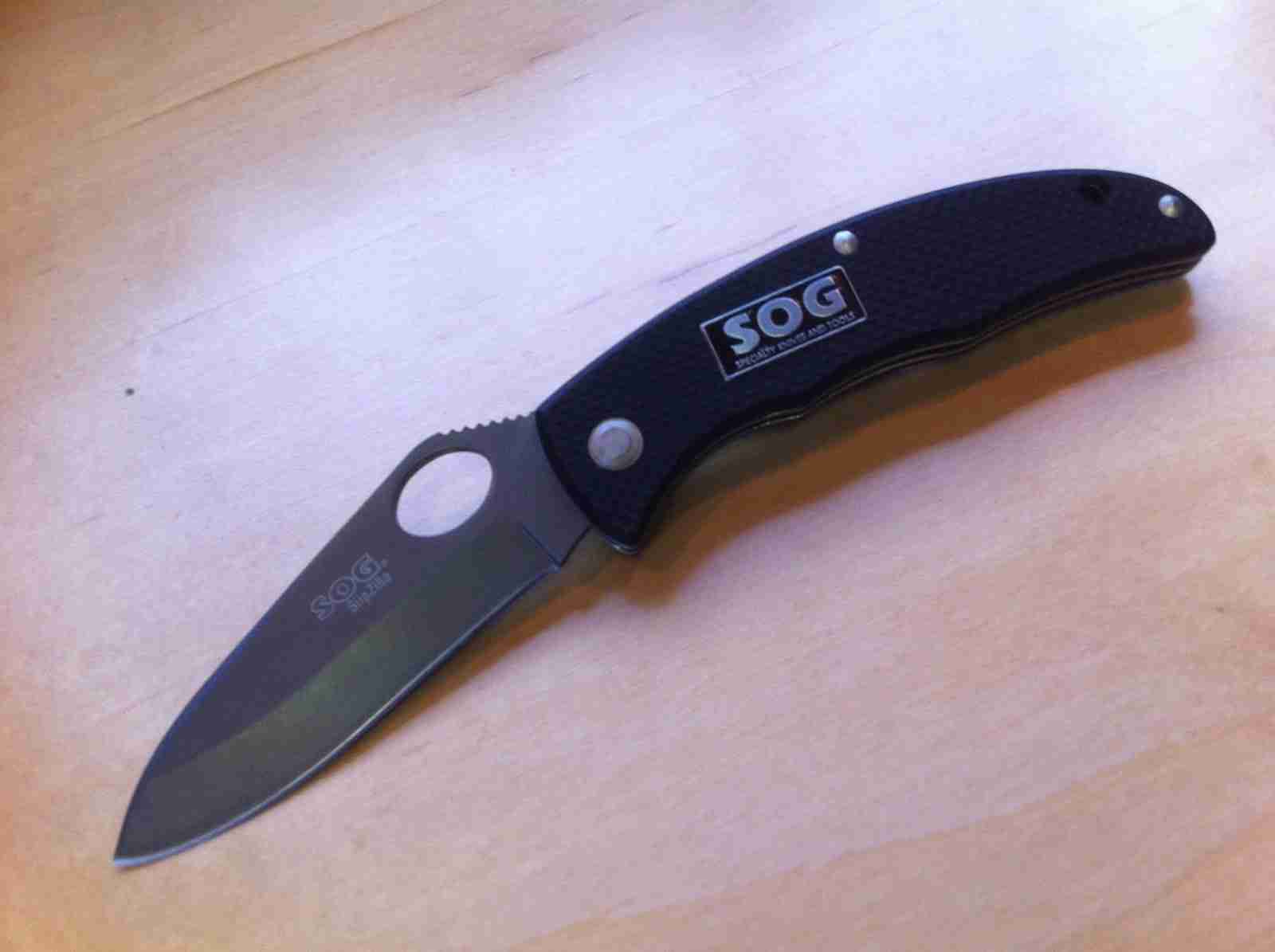 The SOG hole is oval in shape and in some cases has a cut.

So it could be argued that it is not 100% identical to a brand but brands are used to identify and distinguish a specific product.

You see the difference between a group of Spyderco and this SOG or a Benchmade a few meters away and in the end most people will say or think “hey, they all look like a Spyderco.

Now I don’t think you have to fix too much for it, it’s a hole and it’s the design that’s most important also because I repeat in the end everyone will always say has the hole as spyderco is one of the laws of marketing.

How can you consider a hole an idea that cannot be copied?

I don’t think you can take ownership of a drilled hole.

It is the overall quality of the knife that makes it a Spyderco and the hole is now its brand.

He is very well thought out and it is a little surprising that no one has said to himself:

“What’s the best thing I can use to grab the blade with my thumb?” Spyderco did it and that’s why it innovated, the power of demand..

I bet if the other producers had asked themselves the question first by really looking for an answer and innovating, getting there first, this would have been a real bargain for their much bigger company for them and with a “simple hole”.

Today it is not only Benchmade and Sog use a similar “hole” on their knives, other manufacturers are emerging because it is comfortable, helps the opening and can also be used for other functions.

What does Spyderco do with the scraps of all those holes?

Spyderco’s trademark round hole is cut out of each of their blades.

There are a lot of holes made of lasers, which means a lot of advanced steel discs and it’s a lot of steel because they sell a lot of them and also because they’re cut near the thickest part of the blade.

What happens to all the “holes”?

Apparently, most of them are scrapped and sent back to the steel companies spyderco works with for recycling.

But a small part is saved from the workshop and made available for sale in the Spyderco Factory Outlet store – $5 for a bag of 6.

Spyderco is also known to send them to fans via their contact us page.

The holes are unusual collectibles and a curiosity of the manufacturing process of many fans of the brand.

The holes are unfinished, un marked and bear the scars of the laser cutting process used to cut them out. 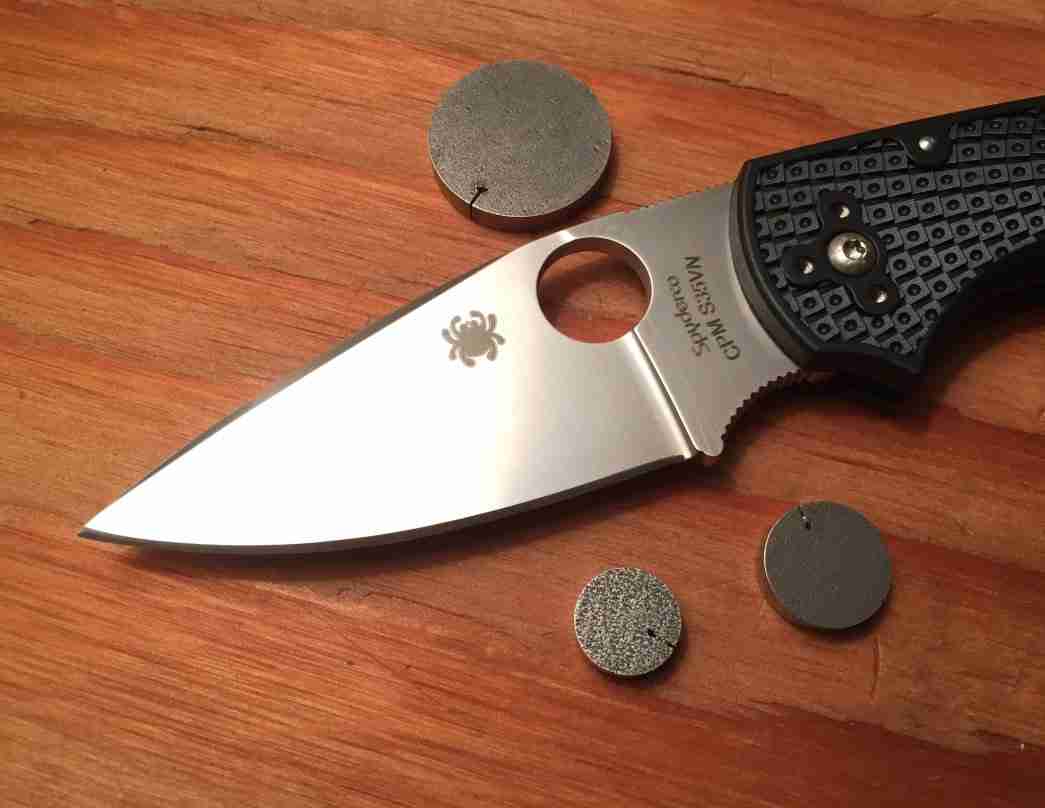 Now it seems incredible how behind a simple hole there is a story that has also made the knife a real symbol for the Spyderco brand.

Innovation in cutlery is something we must never forget.